We’ll close out the AEW year with this and as is often the case around here, Orange Cassidy is defending the All-Atlantic Title. This time though, it’s against his friend Trent Beretta. That could go in a few directions and on top of that, we’ll be hearing from Jon Moxley about something. Let’s get to it.

In Memory Of Don West.

Cassidy is defending, Chuck Taylor/Danhausen are on commentary and Kip Sabian is on commentary. They shake hands for a good bit to start until Trent misses an armdrag. Back up and they run the ropes until Cassidy is hiptossed outside. Cassidy gets back in and sends him outside as well. Then they switch places again, with Cassidy being sent outside for the second time.

Trent’s dive hits Chuck by mistake but it’s turned into a well timed Big Hug. Cassidy dives onto Trent to take over, setting up a high crossbody back inside. Trent knocks him to the floor again but this time Cassidy gets whipped into the barricade. A hard charge hits barricade only though and Cassidy dropkicks him into it again as we take a break.

Back with Cassidy hitting the lazy chops, capped off by a regular one. They forearm it out until a Michinoku Driver gives Cassidy two. He can’t bring himself to try the Orange Punch though and instead tries the Beach Break. That’s reversed into a failed piledriver attempt so Trent settles for a running elbow in the corner. A tornado DDT plants Trent again and the top rope DDT gives Cassidy two more.

Trent’s Crunchie attempt is countered but he can hit the tombstone for his own near fall. A piledriver out of the corner gives Trent two and here is Penelope Ford to interrupt. Ford gets up on the apron to distract Trent, allowing Cassidy to hit a quick Beach Break for two. The Orange Punch retains the title at 11:23.

Post match Trent walks away and Cassidy passes Sabian, who is on the way to the ring for his match.

After Dynamite, Tony Schiavone asked Darby Allin about his upcoming TNT Title shot. Allin is glad to get his title shot in his hometown of Seattle. Everyone laughed at him when he was 115lbs at the end of high school and he proved all of them wrong. Then he became TNT Champion but he lost it all. Now he isn’t sure if anyone, including Sting, believes in him. Sting asks what if he says no before saying he knows Joe is going to kill him. We get the big firing up speech and Sting wants Allin to forget what everyone else is saying. Go get your title back!

Sabian mocks Orange Cassidy, hits a Cannonball in the corner, and finishes with his own version of the Orange Punch at 1:18.

La Faccion Ingobernable is in the back with Preston Vance mocking the idea of the Dark Order. Vance isn’t happy that he doesn’t know next week’s opponent, but he doesn’t mind mocking Negative One on national TV.

Here is Jon Moxley in the ring for a chat (no entrance this time). He isn’t happy with Hangman Page and knew that there was going to be a showdown coming. There can only be one true ace and last man standing after what happened between them in Cincinnati. Page woke up in the hospital that night but he slept like a baby. The Blackpool Combat Club works harder than anyone else and deserve their praise. Wrestling is a tough business and if Page can make it to January 11, he’ll be ready to show Page how rough things can be. Keep your hands up b****.

Jeff Jarrett and Jay Lethal are ready to win the Tag Team Titles on Dynamite. Lethal is rather over the top while Jarrett is serious and to the point about wanting to hurt Max Caster.

Cargill, with the rest of the Baddies, is defending. Hogan small packages her for a fast two and ducks the pump kick. A chokeslam plants Hogan and we take a break. Back with Hogan slipping away but getting caught with the pump kick for two. They head outside where Leila Grey holds Hogan for a slap….which Red Velvet blocks. Back in and Hogan slips out of another chokeslam, setting up a running hip attack on the ropes to rock Cargill. A high crossbody gives Hogan two more bud it’s Jaded to retain the title at 7:33.

Jamie Hayter is ready for whomever Saraya has for a partner on January 11.

Mark Sterling is tired of Bryan Danielson messing with MJF so next week, Danielson gets to face Tony Nese.

Non-title and the rest of the Affiliates are here. They go with the grappling to start before trying to run the ropes. Swerve can’t get a leglock so Yuta slams him down to set up a backsplash for less than one. A bow and arrow keeps Swerve in trouble but he slips out, only to get dropkicked down. The Affiliates offer a distraction so Swerve can get in a shot from behind as we take a break.

Back with Yuta knocking him away and going up top for a forearm. A bridging German suplex gives Yuta two but Swerve’s brainbuster gets the same. Yuta is right back with something like an Angle Slam for another near fall but his knee gives out. Swerve unloads in the corner and hits a running dropkick to said knee. The Swerve Stomp is broken up though and Yuta hits a heck of a top rope superplex. Swerve hits the jumping kick to the head but again can’t hit the JML Driver. The referee gets bumped so it’s a low blow and NOW the JML Driver can finish Yuta at 12:40. 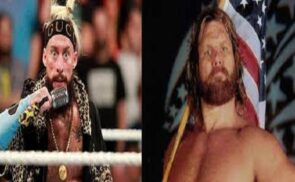 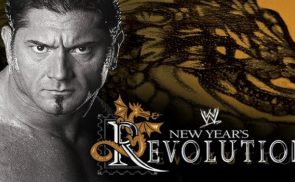