We’re done with Double Or Nothing and things are on a bit of a roll around here. I’m curious to see how they follow up on a pretty awesome pay per view which saw the Inner Circle survive by winning Stadium Stampede over the Pinnacle. There are a few directions they can take before All Out in September so let’s get to it.

Non-title and apparently the Bucks attacked Rey Fenix before the match, including a bunch of V Triggers. Michael Nakazawa, Brandon Cutler and the Good Brothers are here but cue Frankie Kazarian to jump Nakazawa, causing the Brothers to chase him off. Don Callis joins commentary as Pac and Penta (looking Jokerish tonight) hit big dives to the floor. A pair of backdrops keep the Bucks in trouble and they head inside for the opening bell.

Penta comes in to roll Matt up for two with Nick making the save and ragging Matt to the corner. Pac comes in to hit a standing shooting star press for two on Matt but the Bucks set him outside. Matt takes forever to load up the dive, then runs outside and goes to the floor for a running clothesline instead. Back in and Matt spears Pac down to hammer away but a few shots allow the tag off to Penta. A Backstabber takes Nick down and Pac’s pop up powerbomb gets two.

Penta adds a Canadian Destroyer to send Nick into the corner. Matt comes back in with a Canadian Destroyer of his own and everyone winds up on the same apron. Nick German suplexes Pac and Penta Fear Factors Matt, leaving Nick to fight Penta back inside. The referee gets poked in the eye so Nick pulls off Penta’s mask, revealing a second mask. That means a low blow into the Fear Factor, setting up Pac’s Black Arrow for two as Matt dives back in for the save. Pac goes up again but Brandon Cutler hits him in the leg, allowing Nick to grab a rollup pin at 9:42.

Post match the beatdown seems ready to continue but Eddie Kingston runs in for the save.

Tony Schiavone brings out Mark Henry for his big debut. Henry talks about how how he isn’t here to fix AEW because it isn’t broken. Instead he will be here because he loves wrestling and it is time to see what he can offer. Tony asks if Henry is going to get back in the ring, but Henry can’t say yes to that yet. What he can say is that he has a lot left in the tank but here is Vickie Guerrero to interrupt. She has a surprise for us tonight…..and here is Andrade El Idolo. Andrade is here to be the new face of AEW and Vickie demands some applause.

Johnson hits Marshall in the face to start and a quick dropkick gets two. Ogogo comes in and takes Cody into the corner but it’s right back to Johnson for a neckbreaker on Marshall. Johnson gets dropped on the floor though and we take a break. Back with Johnson sending Marshall outside, allowing Cody to come back in and hammer away.

The powerslam sets up the Figure Four on Marshall but Ogogo makes the save with a frog splash. A Diamond Cutter gets two on Cody with Johnson making a save of his own. The Cross Rhodes is loaded up but here is Aaron Solow to offer a distraction. Ogogo punches Cody out and Marshall gets the pin at 9:21.

Post match Marshall shouts at Tony Schiavone about how he told him so.

We look at the Inner Circle winning Stadium Stampede.

Here is the Inner Circle for a chat. Chris Jericho brags about the win and has a gift for everyone here: an Inner Circle Stadium Stampede t-shirt! Well that’s pretty cool. Jericho hands it off to Sammy Guevara, who won the match for them on Sunday. Sammy talks about hitting a 630 to win, just like he used to do off of his mom’s house (Sammy: “Hi mom!”). He can’t believe he got to do it at Double Or Nothing and is so proud that they won.

We get the big hug, followed by Santana promising that this isn’t over because FTR tried to take their careers. Jake Hager says this isn’t over until the Inner Circle says it is over and calls out Wardlow to fight him in an MMA cage. Jericho isn’t done though because thinking of every member of the Pinnacle makes him mad.

The worst of them all is MJF though, because he tried to end Jericho’s career and his life. He thinks about it every day and wakes up in a cold sweat. MJF calls Jericho the greatest of all time and Jericho doesn’t know about that, but he does think that if he wants to keep moving forward, he has to beat MJF. That is exactly what he is going to do, and the middle finger salute wraps it up.

The Best Friends say this isn’t over between Orange Cassidy and Kenny Omega.

Kenny Omega and Don Callis are ready to blow the lid off of this conspiracy to get the AEW World Title off of Omega next week. Omega isn’t worried about his title defense against Jungle Boy either. They hum along to Boy’s theme song for a bonus.

Matt Hardy is here too. Private Party, in street/club clothes, takes over on Boy’s arm to start but he flips over Kassidy and kicks Quen in the ribs. A double springboard wristdrag sends Private Party outside and it’s off to Christian. Hardy offers a distraction though and Quen knocks Christian down as we take a break.

Back with Private Party mocking the five second pose and taking Boy off the apron. Christian manages a double reverse DDT, allowing the tag back to Boy. A brainbuster gets two on Quen and Kassidy has to break up the Snare Trap. Kassidy pokes Boy in the eyes and rolls him up for two but Christian breaks up the Gin and Juice. The Snare Trap makes Quen trap at 11:20.

Post match Hardy hits a Twist of Fate to drop Christian on the ramp.

Taz promises that Team Taz is going to wreck Hangman Page and someone from the Dark Order. Ricky Starks walks off in the middle.

Tony Schiavone brings out Sting and Darby Allin for a chat. Sting talks about how he has a lot of memories in wrestling but he will never forget what he did at Double Or Nothing. The fans let him know that HE STILL HAS IT but Scorpio Sky and Ethan Page pop up on screen to mock both of the two of them. They have a challenge: Allin can go find anyone but Sting and prove them wrong. Allin pulls the mic up but doesn’t bother to say anything.

A bunch of people are in the ring (complete with a table of cheeseburgers) for Britt Baker’s official championship celebration. Baker is very pleased with everyone being here and says everyone is getting a coupon for a free burger. Actually never mind as they are all on the table for her, because she did all of the work. She promised that this was the start of an all new era and she was absolutely right.  It is the start of the DMD era and now it’s time for the burgers, but only two of them are allowed. Tony and Rebel are the only ones allowed to have them, but Nyla Rose throws them away.

Pac and Penta ask Eddie Kingston what was up with that save. Kingston says the enemy of his enemy is his friend.

Blade is here with Bunny. A cheap shot from Bunny doesn’t works as Velvet kicks her down and hits a splash for two. Bunny is sent outside and Velvet hits a dive, almost landing on her head. Thankfully she pops back up and chokes in the corner, only to get superkicked off the top.

Another superkick sends Velvet outside and we take a break. Back with Velvet hitting some clotheslines but Bunny superkicks her down. Blade offers a distraction so KiLynn King and Big Swole protest. The distraction lets Blade send in the brass knuckles but Bunny walks into Just Desserts for the pin at 7:00.

The Dark Order is fired up for John Silver’s birthday because Tony Khan has given him a TNT Title shot. He’s hurt though, so Evil Uno can have it instead! Uno promises to make the team proud.

Miro thanks God for his power and his wife for being hot. He isn’t worried about Uno because he is bigger, stronger and faster. You come after him when you can’t survive.

Bullrope match and you win by pinfall or submission. Aaron Solow is here with Comoroto and the brawl starts on the ramp before the bell. Rhodes is thrown inside and the rope is tied up, meaning we can officially start. Comoroto chokes with the rope on the apron as JR longs for the days of headlocks. Rhodes comes back with a Cactus Clothesline to the floor and they head into the crowd.

Fuego del Sol gets shoved down by Comoroto and then tossed onto some chairs, allowing Rhodes to send them back to ringside. A powerslam plants Comoroto on the floor but he comes back with a bell shot to the face. Comoroto comes up bleeding from the head as Rhodes is barely able to stand. Rhodes posts him but gets dropped onto the apron as we take a break.

Back with Solow putting up a table on the floor but Rhodes hits Comoroto in the face with the rope. That just earns him a powerbomb through the table for two back inside so Solow gets on the apron and removes the turnbuckle pad. Cue Colton Gunn to beat up Solow as Rhodes hits a bulldog and the Final Reckoning on the cowbell….for one. A low blow staggers Comoroto and it’s a middle rope bulldog to put him down again. Rhodes gets smart and hogties him for the pin at 10:08. 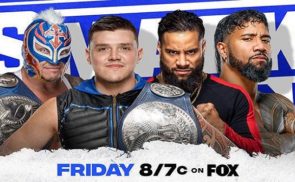