We’re continuing down the road towards Neville vs. Akira Tozawa for the former’s Cruiserweight Title, though for some reason this includes a big detour into Titus O’Neil Land. I’m assuming this is WWE’s way of attaching the shows to the main roster, but there are some more interesting options than O’Neil. Let’s get to it.

Rich Swann is talking with Tozawa in the back with Swann being ready to face Neville in tonight’s main event. Titus comes in and wishes Swann good luck. With Rich gone, Titus has a contract ready for Tozawa to sign. Tozawa won’t do it yet so Titus offers a 5% on Tozawa’s first merchandise. Say…..the Tozawa Towel? That’s still not enough so Titus promises to have the perfect deal ready for Raw. Titus leaves and Tozawa just shakes his head.

Fallout from Nese telling the injured Austin Aries to get out of his ring last week. Gallagher wastes no time with doing the headstand in the corner to slow Nese down. They fight over a top wristlock until Gallagher eats a clothesline to the back of his head. We hit the Tree of Woe with Nese dropping to his back to kick Jack in the chest.

Jack fights up and grabs a butterfly suplex for two as Aries (with his trusty banana) are watching in the back. The headbutt connects but does more damage to Jack than Nese, as is typically the case. Nese goes shoulder first into the post and let’s pause for some goldbricking. Tony grabs the rollup into the turnbuckle, followed by the running knee for the pin at 5:02. 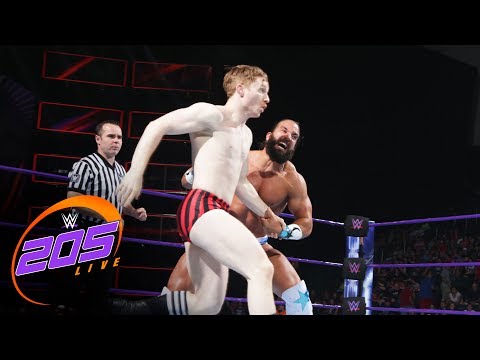 Noam Dar is on his phone with Alicia Fox again, talking about wanting to move on. Cedric Alexander comes in and talks about wanting for this to be over but Dar says he threw Alexander’s bag in the river. Cedric holds up his bag and has no idea what’s going on.  Cue Ariya Daivari to say his $15,000 bag is missing and Dar looks guilty.

We recap Drew Gulak vs. Mustafa Ali as Drew pushes for the rise of mat wrestling.

Drew shouts into his bullhorn about wanting ground based offense and top wristlocks instead of inverted 450s. Ali dropkicks him through the ropes and hits a running corkscrew plancha for good measure. Something close to a moonsault press gives Ali two but he gets shoved over the top and down to the apron on his wrist.

We hit something like a keylock for a bit, followed by an abdominal stretch. The wrist is wrapped around the top rope, only to have Ali come back with a dropkick. The slingshot rolling neckbreaker looks to set up a middle rope dropkick but Gulak tries to counter into a rollup. Ali reverses into one of his own though and grabs the pin at 4:38. 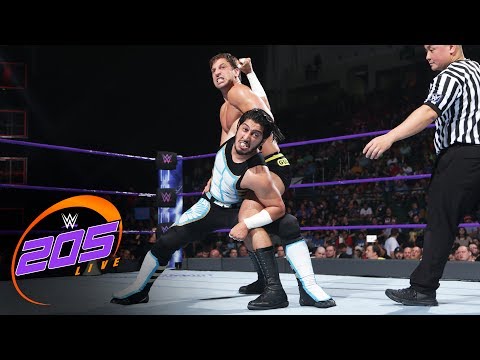 Gallagher runs into Aries in the back with the latter suggesting they form an alliance of cutting corners. Jack doesn’t like the idea but agrees to an accord (Aries: “I thought you had a Lincoln.”) because they’re international brothers of the mustache.

TJP comes up to Swann and accuses him of colluding with Neville but Swann points out how ridiculous that is. It seems to turn into a TJP pep talk.

Tozawa is now sitting ringside courtesy of the Titus Brand.

Non-title. Swann goes right for him and dropkicks the champ out to the floor. They roll around on the mat for a bit before another dropkick sends Neville outside again.  Neville gets thrown outside for the third time and Swann hits a good looking running flip dive.  Back in and something like Rolling Thunder hits raised knees so Neville sends the banged up ribs into the barricade.

They run in front of Tozawa to remind you that he’s here before Swann goes into the barricade again. Swann’s ribs bounce off the announcers’ table, only to just collapse back inside. Rich pops back up enough for a superkick to drop Neville. A kick to the head gets two on Neville and Swann knocks him away while whispering to avoid the Phoenix splash. Neville does as he’s told and the Rings of Saturn make Swann tap at 10:41. 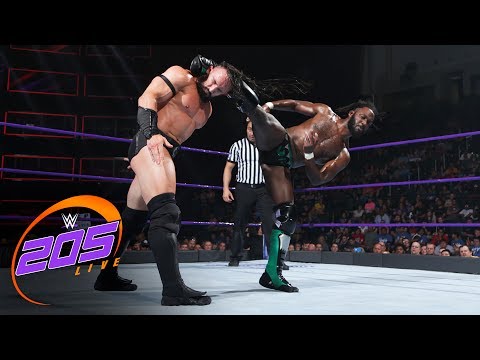 Neville stares Tozawa down to end the show.

Remember to check out my website at kbwrestlingreviews.com follow me on Twitter @kbreviews and pick up the Histories of Saturday Night’s Main Event and Clash of the Champions, now in PAPERBACK. Check out the information here: 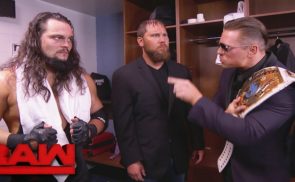 Why Did Bo Dallas and Curtis Axel Join Miz? 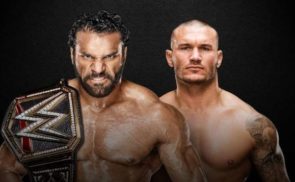