The prodigal son has returned. Tonight at the 2022 ROH Supercard of Honor, Samoa Joe made his return to professional wrestling, appearing in the final segment of the show.

You can see the return below:

WHAT A RETURN TO #ROH WE ARE WITNESSING RIGHT NOW! @SamoaJoe just arrived and business has picked up! What an incredible night it has been at #SupercardofHonor! pic.twitter.com/P5ssPlI333

Bandido handed him his belt and helped him celebrate his victory before leaving the ring. Gresham closed the show with a speech, but he was interrupted by Jay Lethal. The show ended with Lethal and Sonjay Dutt attacking Gresham until Joe showed up. He choked Dutt out while Lethal watched.

Joe has not been seen in professional wrestling since late 2021 when he was forced to vacate the NXT championship after being sidelined with an injury. He was released on January 6 of this year by WWE.

I am always glad to see Samoa Joe, and I am thrilled that he’s back in professional wrestling. I just hope that he does not get lost in the shuffle, as I think he is one of the foremost talents in the world. I will never understand why WWE let him go, but their loss is Tony Khan’s gain. I look forward to seeing what ROH does with him in the future! 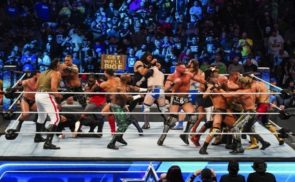