How Did Johnny Impact Do On Survivor?

It had been previously reported that Impact superstar Johnny Impact would be competing on the 37th season of the hit reality show, Survivor. But how did he do in the competition?

Unfortunately, tonight was the end of his road, as he was blindsided and voted out of the game. He was the 9th person eliminated and will serve as the second member of the jury.

You can see his initial video on the show, where people get to know him, below:

SURVIVOR David Vs. Goliath - Getting to Know John Hennigan

How did it all go down? People.com sums it up:

NOOOOOOOOOOOO!!! I have been a huge fan of Survivor for years and I honestly did not see this coming. I was pleasantly shocked when the idol was played for Christian, but when Dan played his for Angelina, I thought for sure that they were going to have a revote and someone was going to get hosed. However, I had no idea that John was going to be the target of a secret plan that no one knew about. This is why I LOVE Survivor! 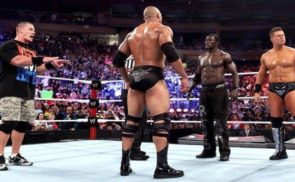 Watch: John Cena & The Rock vs. The Miz and R-Truth From Survivor Series 2011