What’s the right word to describe this? Following “Takeover: Toronto”, Samoa Joe is once again the NXT Champion, having defeated Shinsuke Nakamura for the title in controversial fashion. However, that means that it’s time for a new #1 contender, which was crowned last night at the “NXT” tapings. According to 411mania.com’s taping report, as of last night, Bobby Roode is the new #1 contender, having won a four way match for the future title shot. Roode’s shot will come on January 28 at “Takeover: San Antonio.”

There’s more to this one though. Before Samoa Joe defends against Roode, there are two major matches to get by first. This Saturday in Osaka, Japan, Samoa Joe will defend the title against Nakamura in a match that will air next week on “NXT”. That’s not all though. The following Thursday, Samoa Joe will again face Nakamura in a cage match in Melbourne, Australia with the title on the line. Portions of this show will be taped for the WWE Network, though it’s not clear if the title match will be part of the taping.

At this point, “Takeover: San Antonio” really could go either way. My guess is the title winds up back on Nakamura as it’s hard to imagine they do a heel vs. heel main event. Then again there’s always the chance that Roode is turned face by then but I can’t imagine that being the case. Nakamura winning the title back in Japan should be a layup but stranger things have happened. That’s what I love most about NXT though: I’m not sure where this is going but I know the matches are going to be awesome either way.

Who do you want to defend the title in San Antonio? Is Bobby Roode a good choice for the challenger? Let us know in the comments below. 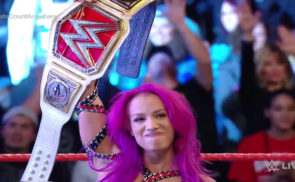 KB’s Review: We Get It Already