The next big one? AEW does not go on pay per views very often but when they do, it means something special is going to happen. The shows are often headlined by a World Title match, with AEW focusing on building to the biggest match that they can put together. That is what they are hoping to do for their next pay per view and they might have an idea of what that will be.
This week’s AEW Dynamite saw the announcement of the Tournament Of Champions to crown a new AEW World Champion. According to Dave Meltzer on Wrestling Observer Radio, the likely result will see Jon Moxley winning the tournament and going on to face Maxwell Jacob Friedman in the main event of Full Gear on November 19. This is to be viewed as speculation and not as a fact at the moment.

Opinion: That works as well as anything else does, as Moxley is the most recent person to be pinned for the World Title and Friedman seems all but ready to move on up and become champion. I could certainly go for Friedman vs. Moxley as a pay per view main event, though it might take quite the bit of storytelling to get to that match from where things are right now.

What should headline the show? Who leaves Full Gear with the title? Let us know in the comments below. 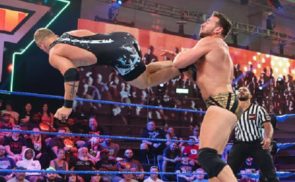