Well now everything has changed. Ring of Honor’s future suddenly looks WAY different and that is not the best news. I’m not sure what is going to happen with the company but it is clear that things are going to be wrapping up. Hopefully the final few shows are good, but this is very uncharted territory. Let’s get to it.

Vincent is checking himself in the mirror and has the rest of the Righteous say that “he” is going to love it.

Quinn McKay runs down the card, which is all based on Violence vs. Pure.

Both of them talk about how they want to show that their style is better. They go with the technical stuff on the mat as Deppen wants to show he can do this too. Titus grabs a test of strength and powers him to the mat without much effort but Deppen reverses into a leglock. That’s broken up and we take an early break, coming back with Titus putting on a headscissors. Deppen is out in a hurry with a backslide but Titus snaps off a butterfly suplex for two.

A knee to the ribs and a knee to the back of the head give Deppen two of his own before he ties up Titus’ arms. Some biting of the hand gets two on Titus and here is Homicide to get on the apron for no logical reason. Titus blocks a backsplash by raising the knees and we take a break. Back again with Titus being sent to the apron but managing a hard slingshot shoulder for two. Homicide grabs a chair for a distraction, causing Titus to miss a running boot in the corner.

Deppen kicks him to the floor and hits a suicide flip dive (a Homicide specialty), followed by a top rope double stomp for two back inside. Homicide is NOT happy with the kickout as they trade rollups for two each. Titus gets in a gutwrench suplex and some running boots in the corner, setting up an implant DDT for two more. There’s the half crab with a knee in the back but Homicide throws in the chair for the distraction. Said distraction lets Deppen hit Titus with the chair, setting up the running boot for the pin at 12:23.

Post break, Titus wants to know where the Foundation was during that.

Tony Deppen asks why Homicide wouldn’t help him. They’re from the places with no rules so why would they follow rules here?

Homicide and Jay Lethal are the seconds. Before the match, both teams say their way is better. The Foundation jump them from behind to start in a bit of a twist and the fight goes outside early. Dickinson beats on Gresham in the corner and hands it off to King to power him around. It’s right back to Dickinson, who tries to go after Gresham’s leg.

King is back in with a neck crank to grind Gresham down but he finally sends King into Dickinson. That’s enough for the hot tag off to Williams so the pace can pick way up. Dickinson kicks Williams in the face but Williams hits a running corner clothesline. We take a break and come back with Gresham getting the tag and chopping away at Dickinson. The Foundation takes turns stomping on Dickinson’s ankles but Gresham ducks right into a knee to the face to knock him silly.

Gresham gets up a boot in the corner though and tweaks King’s leg, setting up the sleeper. The other two get in a brawl of their own though and then crash the hold for the save. We take another break and come back again with King Boston crabbing Williams as Dickinson gets Gresham in an STF. Both holds are broken up so Dickinson puts the STF on Williams. That’s reversed into a Crossface but Dickinson flips out of that as well and grabs a rear naked choke. King holds Gresham back as Williams passes out at 12:52.

Jay Lethal and Homicide are already here and since they’re scheduled for the main event, let’s go.

Lethal has the Foundation head to the back while Violence Unlimited stays at ringside, which can’t possibly go badly. Lethal starts fast and knocks Homicide outside, setting up the triple suicide dives. Back up and Homicide shoulders him to the floor, setting up the big flip dive and they’re both down for a second.

They get back in for the slow motion slugout until Lethal misses a middle rope dropkick. For some reason a fork is placed in the turnbuckle but neither can go face first into it. Instead, Homicide chokes away but Lethal scores with a superkick. Cue Dutch of the Righteous to jump Tony Deppen as the Lethal Injection finishes Homicide at 5:37.

The Righteous poses on the stage and applaud everyone to end the show. 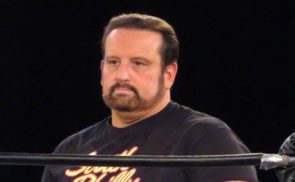 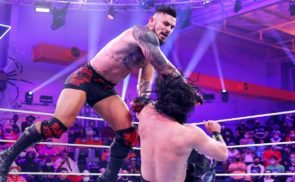