It’s time for another title show as Moustache Mountain is defending their Tag Team Titles against Ashton Smith and Oliver Carter. That could be quite the showdown, as NXT UK tends to do rather well when it comes to title matches. I’m curious to see what else they have on the show so let’s get to it.

The opening video looks at the Tag Team Title match, as Smith and Carter are ready for their big shot at the gold.

They fight over wrist control to start with Amale taking her down into an armbar. Back up and a shoulder drops Brookside, who can’t believe Amale would do that to him. Amale tries to pull her out to the corner but Brookside says Amale can’t do that. Brookside: “I’M SPECIAL!” Amale counters a crossbody into a slam and a basement dropkick gets two. Brookside finally gets in a shot of her own and chokes Amale on the ropes before standing on her back for some screaming.

The armbar has Amale in trouble and the look on her makes would make you think she is being stabbed by a lightning bolt. Some elbows to the head have Amale in more trouble and Brookside mocks her again. Back up and Amale strikes away, including a running boot to the side of the head. Brookside forearms her back though and a kick to the head makes it worse. Amale isn’t having that though and sends her into the corner for a running boot to the face. The Hope Breaker gives Amale the pin at 6:17.

Pretty Deadly walks through a Jack Starz/Dave Mastiff interview. Mastiff tells Starz that he knows what to do. That brings us to Challenge #4: Bomber Initiative. Starz goes into Pretty Deadly’s dressing room and we cut to Pretty Deadly in their street clothes….which now have holes in the chest. Yelling ensues.

The rest of Die Familie is here with Raja. Jones can’t spin out of a wristlock to start but some right hands in the corner work a bit better. A knee to the ribs takes Raja down and a boot to the face sends Raja outside for a Die Familie meeting. For some reason Jones decides to go outside after him and gets driven into the apron to put Raja back in control.

A running basement dropkick to the back of the head gives Raja two but his trash talk brings Jones back up. An enziguri into a belly to back suplex drops Raja again but it’s a rather slow near fall. Jones’ banged up back gives out though and it’s a Backstabber into a jumping Downward Spiral to give Raja the pin at 5:03.

Post match the big beatdown is on with Jones being left laying, though Charlie Dempsey didn’t seem sure about it at first.

Eddie Dennis whispers to Symbiosis about how an arrow has to be pulled back before it can go forward. The team looks ready to come back.

A truck driver is distracted by eating a hamburger and hits….what might have been a werewolf. The wolf/person is watching from the road as the driver looks at some fur on the road.

Sha Samuels runs into Mark Coffey for an exchange of insults before their match next week.

Die Familie again runs into A-Kid and stares at him. Charlie Dempsey calls the other two off and asks if A-Kid has something to say to him. A-Kid thought Dempsey was better than that and Dempsey says maybe.

Andy Shepherd brings out Meiko Satomura to honor her career. First up, we see a video on her title reign and Andy hands her a bouquet of flowers. Satomura says thank you but Isla Dawn pops up (with the camera going a bit wacky, like it’s in a weird world) to say she is distressed over not receiving an invite.

She thanks Satomura for giving us something to desire but now she needs her final trophy. At the moment, Satomura possesses it, so Satomura says if she wants a title shot, all she has to do is ask. Dawn says she takes things and kicks Satomura in the head. Then she takes and eats the flowers.

Sam Gradwell tells himself to get over having his hair being shaved but what gets to him is people, like his son, asking what happened to his mohawk. He can get over Kenny Williams doing that, but he doesn’t think Williams can get over what Gradwell is going to do to him.

We look back at Nathan Frazer challenging Ilja Dragunov for the NXT UK Title.

Ilja Dragunov accepts the challenge, even though he had to win a battle royal just to get a title shot. Then he failed, because he wasn’t ready yet. He knows how good Frazer is, but he also knows how great he can be. Frazer isn’t ready, but he’ll take his first step.

Moustache Mountain is defending. Bate and Smith lock it up to start with Smith having to bail to the corner to escape a takedown attempt. Carter comes in and gets taken to the mat as well but manages to pull Bate into an armbar. That’s broken up and Bate takes him down, allowing Seven to come in for an assisted twisting moonsault. Carter is able to forearm him into the corner and there’s an armdrag into an armbar.

Smith comes back in and gets chopped/slammed, allowing Seven to drop a leg for two. It’s back to Bate to grind away on a headlock before unloading with forearms to both of them. Smith gets in a shot of his own though and brings in Carter, whose springboard…is pulled out of the air. Bate swings him around to knock Smith down as well but it makes Bate dizzy too. That means Carter can kick Bate in the head before a hurricanrana out of the corner sends him flying.

Carter even knocks Seven off the apron before he can do anything about it but Bate is back up with a suplex. The running shooting star press looks to set up the Tyler Driver 97 but Carter backdrops his way out. Bate settles for the rebound lariat and it’s back to Seven, leaving Bate to knock Smith off the apron. Something like Private Party’s Silly String into a tornado DDT lets Carter hit a springboard moonsault for two of his own and Seven is in trouble.

Seven sends Carter outside though and hits the Seven Star Lariat on Smith. Emerald Flosion gets two with Carter having to make a save. Bate comes back in so Smith Blue Thunder Bombs him for two of his own. An assisted moonsault (how they won the tournament) gets two on Bate and Carter is down too. A Silly String moonsault is cut off by Seven so Smith goes with a top rope Rough Ryder for two on Bate.

One heck of a Doomsday cutter drops Bate again but this time it’s Seven making the save. Everyone is down for a much needed breather Smith knocks Seven’s right hand back into Bate but Seven and Carter are knocked outside. That leaves Smith to hit a great superkick on Bate but Bop and Bang into an enziguri knock Smith silly. Bate knocks Smith silly with a left hand and covers, with Smith getting his foot on the ropes….but Seven shoves it off so Bate (who didn’t seem to see what Seven did) can retain the titles at 13:12. 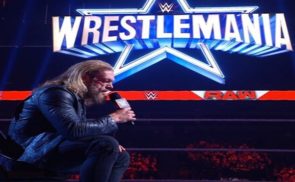