The focus is on the women again this week as we have a battle royal for the #1 contendership to the Women’s Title. Other than that, we are probably going to be getting a lot more attention on Cora Jade betraying Roxanne Perez last week. And maybe Bron Breakker can do something. Let’s get to it.

We open with a long recap of last week, with Cora Jade turning on Roxanne Perez and costing her the Women’s Title.

Grimes shoulders him down but McDonagh kicks at the knee. That doesn’t bother Grimes, who kicks him in the chest and hits a backdrop. A whip into the corner has McDonagh on the apron and a big boot puts him on the floor. Back in and Grimes hits a high crossbody to rock McDonagh again, but here is Joe Gacy on the platform for a distraction as we take a break.

Back with Gacy still looking down and McDonagh blocking a suplex from the apron. McDonagh goes back to the knee and kicks away at it in the corner, only to get caught in a swinging Side Effect. Another shot to the knee slows Grimes down so he enziguris his way out of trouble. McDonagh goes for the leg again so Grimes knees him in the face. Grimes is knocked to the apron but McDonagh headbutts him, with Grimes’ knee getting caught in the ropes. That’s enough to slow Grimes down so the Devlin Side can finish Grimes at 13:24.

Nikkita Lyons is ready to win the battle royal tonight.

Tiffany Stratton is OFFENDED that she has to be in the battle royal tonight but she’ll win anyway.

Here is Cora Jade for her big explanation. After coming close to using the start of Hulk Hogan’s Bash At The Beach 1996 speech, Jade talks about how she has been the featured star of the women’s division since she got here. People have been talking about how great she is at such a young age. Then she found the perfect partner in her best friend, Roxanne Perez. Everything was great and they won the Tag Team Titles, but not THIRTY MINUTES LATER, Perez wanted to do something more by winning the Women’s Title.

That was so disrespectful so it was time to do something about it. That’s why Jade didn’t mind turning on her last week and hitting her with the title. Now Perez is gone with a broken heart but they are still the Women’s Tag Team Champions. The titles mean nothing to her in the new Generation of Jade, so she throws it in the trash at ringside.

Xyon Quinn likes what Jade did but now he has something to look forward to next week: a one on one match with Apollo Crews. Sure Crews can throw weight around in the gym, but he couldn’t do it on the main stage. Now the X Factor gets to take Crews out.

They trade headlock takeovers to start with Strong getting the better of things early on. Back up and Kemp grabs a suplex before a gutwrench suplex makes it worse. Strong is back with some knees to the ribs to put Kemp down as commentary talks about Strong’s failings as the leader of Diamond Mine. Kemp gets in some more suplexes, but we cut to the D’Angelo Family on screen laying out the Creed Brothers. Kemp is distracted enough that Strong can hit a jumping knee for the pin at 5:56.

Pretty Deadly, in their cowboy gear, is ready to win the Tag Team Titles.

Josh Briggs and Brooks Jensen ware ready to keep the Tag Team Titles and then Fallon Henley is winning the battle royal. She tells them to focus, because keeping the titles is harder than losing them.

Diamond Mine is banged up but Roderick Strong is ready to fight the D’Angelo Family.

Briggs and Jensen, with Fallon Henley, are defending. Jensen knocks Prince into the corner to start for some clotheslines and a backdrop as everything breaks down early. A cheap shot has Briggs in trouble but he knocks Prince outside….and right into Henley. The champs panic as Henley is down and we take a break.

Back with Prince taking Jensen down for a chinlock and keeping him from getting over for the tag to Brigs. That doesn’t last long as Jensen gets over to Briggs for the tag so house can be cleaned. Stereo crossbodies put Briggs and Wilson down, with Prince handing Wilson a title belt. Then Prince slides Briggs the other belt so the referee doesn’t see Henley grab Wilson’s title. The tug of war lets Briggs and Jensen hit a High/Low to retain the titles at 11:34.

Joe Gacy says it is time for the Dyad to reveal themselves but there is no going back. And it’s the Grizzled Young Veterans, who he baptizes as Jagger Reid (James Drake) and Rip Fowler (Zack Gibson). They might be named the Schism.

Wes Lee is still on his quest to find himself and now it’s time to go after Grayson Waller and then Trick Williams.

Here is Bron Breakker for a chat. He can respect someone coming to him and asking for a title shot like Cameron Grimes, but then there is someone like JD McDonagh who jumps him from behind. Breakker knows who McDonagh is and here is McDonagh on the screen. McDonagh talks about how he knows Breakker is tough and will fight through anything, but McDonagh knows how to hurt people.

That bad shoulder Breakker has is comprised of eight major muscles, which McDonagh draws on a mannequin. Breakker is tired of the lesson and tells McDonagh to come down here and fight him. McDonagh says in due time and watch that shoulder. Breakker threatens to take the shoulder and beat McDonagh over the head with it.

Von Wagner and Solo Sikoa got in a fight backstage at Smackdown, with Wagner beating him up outside the building.

The Diamond Mine is fired up and ready to take out the D’Angelo Family. The Family has two choices, both of which involves getting beaten up.

Axiom is a masked man who looks like a superhero, complete with special effects that make him look like he moves in a blur. They fight over wristlocks until Axiom takes him down by the arm. Chen sends him outside but Axiom comes back in with a tornado DDT. A jumping kick to the face finishes Chen at 2:56.

Lash Legend brags about her greatness.

Giovanni Vinci grants a fan a picture (with the fan not in it) but Chase U arrives and gets in the way of Vinci’s car. They go inside but don’t move their bus, leaving Vinci annoyed.

We go to the barber shop where Carmelo Hayes and Trick Williams aren’t impressed with Hayes’ potential challengers. Williams will be watching Wes Lee vs. Grayson Waller next week though.

There’s a new QR code, which links to a woman wearing boots and walking somewhere.

Cameron Grimes is leaving and an unseen interviewer (sounds like Jeremy Borash) won’t take no for an answer on asking questions. Grimes snaps and yells about how he wants to go home, but Joe Gacy pops up to say he gets it.

Tony D’Angelo accepts the Diamond Mine’s challenge for next week.

For the next shot at Mandy Rose and commentary confirms that Zoey Stark is behind the QR codes. Everyone glares at Jade, who walks outside and gets beaten up by Nile. Miller is out first and Grace is kicked out as well. Fyre and Legend eliminate each other and brawl to the back, because basketball related feuds run deep.

Stratton knocks Choo out but she lands on her pillow and gets back in. Stark tosses Leon and Feroz and James kick Henley out. Stratton hits Choo in the face with a cup to get rid of her as well and we take a break. Back with Carter and Chance putting Nile out but getting knocked out as well. Paxley dives onto the two of them to save Nile and eliminates herself in the process. Stratton dumps Hartwell and we’re down to Stratton, Lyons, James and Stark.

James drives Lyons into the corner but gets kicked in the face for the easy elimination. Stratton dumps Lyons, leaving her alone with Stark. A clothesline puts Stratton over the top but only one foot hits, allowing her to get back onto the apron. Stratton backdrops Starks to the apron but they both get back inside. Stark forearms Stratton out….but Jade comes back in through the crowd and….gets backdropped out as well to give Stark the win at 13:10. 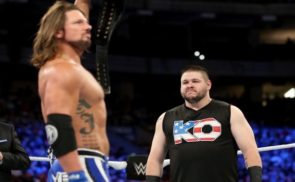 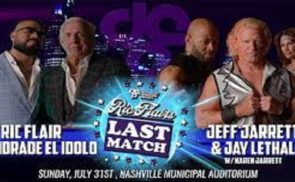