We’re in a new NXT era as Dolph Ziggler won the NXT Title. That was a bit of a surprise when it took place but now it seems like all roads lead to Bron Breakker getting his title rematch at Stand & Deliver next month. With a few weeks to go, it is now time to see how this NXT show has nothing to do with any of that. Let’s get to it.

Carmelo Hayes is here with Williams and sits in on commentary. Williams grabs a headlock to start as Hayes talks about how he is a bigger star than the NXT Champion (who he doesn’t mention here, as this was filmed before NXT). Raaj sends him into the corner but comes back with a kick to the face. A running corner clothesline connects and it’s time for something like a standing Disarm-Her. Raaj fights out and hits some running forearms, setting up the COME ON to the crowd. Williams is back with a spinning kick to the head and a running neckbreaker finishes Raaj at 4:09.

Malcolm Bivens is here with Nile and the debuting Barlow looks a bit like Tiffany Stratton. Nile wastes no time in hitting a spinebuster but Barlow wristlocks her down into an armbar. A sunset flip out of the corner gives Barlow two so Nile hits her in the face. A standing reverse cravate has Barlow in more trouble but she makes the clothesline comeback. An Oklahoma roll gives Barlow two so Nile Dragon sleepers her for the win at 3:53.

A woman stares at Jensen during his entrance and he certainly notices her. Gibson gets double shouldered down to start but Briggs gets dragged into the corner for a shot from Drake. Briggs shrugs that off and knocks him into the corner, allowing Jensen to come back in for the snap jabs. Some double teaming takes Jensen down though and Drake grabs a chinlock. Jensen belly to back suplexes his way to freedom as Nigel keeps making Freebirds references.

The hot tag brings in Briggs to clean house and everything breaks down. A missile dropkick/Downward Spiral combination gets two on Briggs as Jensen is still down on the floor. Drake misses a running corner dropkick and it’s Jensen coming back in to take over. Hold on though as the woman in the crowd distracts Jensen, allowing Drake to counter a suplex and fall on top of him as Gibson holds the foot (ala Bobby Heenan) for the pin at 7:06.

Post match Fallon Henley comes out to yell at the Veterans and Briggs/Jensen take out Drake to end the show.

WWE Having Problems Inducting Legendary Team Into Hall Of Fame 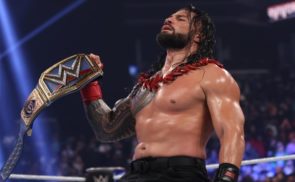