WWE Having Problems Inducting Legendary Team Into Hall Of Fame

They have some names in mind. The WWE Hall of Fame is an interesting situation, as it doesn’t exactly have a clear criteria for entry. Some wrestlers being inducted are a bit obvious while others might be a surprise. There are also wrestlers who are not in for one reason or another, which can often involve them turning down an invitation. That might be the case again with a legendary team.

According to Dave Meltzer on the Sunday Night’s Main Event podcast, WWE is hoping to induct the Steiner Brothers, or at least one of them, into this year’s Hall of Fame class. While Scott has not been associated with WWE for nearly twenty years and has had several negative things to say about the company, Rick appeared with his son Bron Breakker at an NXT event earlier this year. There is no word if either or both will be inducted, but they have been discussed behind the scenes.

Opinion: While I would love to see the Steiners being inducted, one without the other wouldn’t exactly work. Rick did have a singles career, but Scott was the bigger star. That being said, their work as a team is what they are remembered for and that would be the best way to induct them. However, if Scott isn’t interested, there isn’t much that can be done to convince him to come in.

Will the Steiners be inducted? Who else should be part of the class? Let us know in the comments below.

WRESTLING RUMORS: Monday Night Raw Said To Be Worse Than Ever Backstage 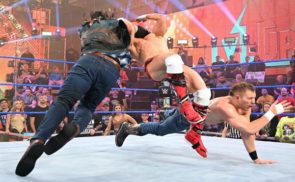