Believe it or not it’s tournament time on a WWE show with the first round of the Dusty Rhodes Tag Team Classic starting tonight. The interesting team involved is the reformed DIY, who are probably the favorites in the whole thing despite having the consistency of something with very low consistency. Let’s get to it.

The opening video looks at the Dusty Classic, with each team getting to say that they’ll be winning.

Aichner and Black start things off with Aichner’s shoulder not even getting a one count. Barthel comes in and gets struck down in short order with Black armdragging him into an armbar. It’s already back to Aichner to stomp Black down in the corner as the villains take over for the first time. Barthel knees Black in the face and knocks Ricochet off the apron so he can get two.

Black kicks away from a reverse chinlock though and it’s off to Ricochet to speed things up. Kicks abound and Ricochet sends Barthel into Aichner, who DDTs his partner by mistake. Ricochet hits the springboard European uppercut and the standing shooting star for two. Back up and Barthel throws Ricochet into a suplex from Aichner, followed by a double springboard moonsault for two.

Ricochet is back up but a kick to the back cuts off his dive, allowing Aichner to hit a springboard tornado DDT for two. Aicnher gets low bridged to the floor and Ricochet rolls over to bring in Black, who was fine watching his partner get double teamed. The Europeans catch Black in the Tree of Woe for a double dropkick but Ricochet is in with a springboard hurricanrana to Barthel. A heck of a suicide dive takes Barthel down again but Aichner counters Black’s dive into a rollup for two. Back up and Black Mass finishes Aichner at 8:20.

We look back at Dominik Dijakovic vs. Keith Lee from last week with the double countout likely setting up a rematch.

Earlier this week, Dijakovic tried to get at Lee at the Performance Center but some wrestlers (including Eric Bugenhagen) held him back. The rematch is in two weeks.

Steve Cutler/Wesley Blake for the Sons with Jaxson Ryker on the floor. Burch takes Cutler down by the arm to start and it’s already off to Lorcan for a headlock. The Sons get him over into the corner to take over though and it’s a backbreaker into a double chokebreaker for two. Another double backbreaker gets one and we hit the reverse chinlock with a knee in Lorcan’s back. Lorcan fights up (of course) and brings in Burch to take over, including a release German suplex to both Sons.

The middle rope dropkick into the nipup brings Lorcan back in with Blake hitting a quick backbreaker for two. The Boston crab stays on Lorcan’s back until Burch headbutts the heck out of Blake for the save. Burch slips out of a powerbomb and it’s Lorcan firing off chops to both Sons. Everything breaks down and the spike DDT gives Burch two. Cutler blocks what looked to be a German suplex attempt and it’s Lorcan getting toss powerbombed into Cutler’s knees in the corner. A reverse DDT/middle rope double stomp combination finishes Lorcan at 8:21.

Here’s Velveteen Dream to remind us that he’s North American Champion (his words) but it’s Matt Riddle interrupting. This could be interesting and, as expected, Riddle says that he likes the look of the title and wonders what it would look like around his waist. Dream says the spotlight is on him….and that becomes literal.

Io Shirai and Kairi Sane both want the Women’s Title but have to worry about Bianca Belair. Shirai says it’s her destiny to be champion and switches to Japanese as she seems to say she’s the best.

Next week: Belair vs. Shirai in a #1 contenders match.

Bate and Ford hit the mat to start with an exchange of headlocks. Dawkins tags himself in to run Bate over for two and it’s back to the mat with a waistlock. Bate gets up with an enziguri and it’s off to Seven, who stands in place so Bate can hit his bounce off the shoulders senton for two. The Profits take over on Seven for a change and it’s a kick to the ribs to set up a cravate. The fans get behind Seven, who fights up with a hard DDT for the double knockdown. It’s back to Bate for the top rope back elbow to the Dawkins. The standing shooting star gets two and Seven sends Ford outside.

The Dragon suplex/clothesline combination is broken up and Dawkins spears Seven for two. Ford is back up for a heck of a dive onto Seven as Bate hits Bop and Bang on Dawkins. With Seven down, it’s the Sky High into the crazy frog splash for two on Bate. Seven is back up for a dragon suplex to Ford on the apron and Bate German suplexes Dawkins. The torture rack (with Seven nearly dropping him) to Dawkins into the top rope knee from Bate is good for the pin at 7:22.

Bobby Fish/Kyle O’Reilly for the Era here. Gargano and Ciampa come out to their own music but then switch to the DIY song on the ramp. Fish goes after Gargano’s leg to start as the DIY chants are clearly louder than the UNDISPUTED ones. With Fish not being able to do much, O’Reilly comes in and gets armdragged down. It’s also off to Ciampa for a wristlock so Fish tries his luck again.

Everything breaks down for a bit with Gargano diving onto Fish, leaving Ciampa to get a neckbreaker on O’Reilly for two. Fish is back up with a legsweep to take Gargano down on the apron though and the Era takes over. It’s a kneebar to keep Gargano in trouble and some right hands keep him down. Gargano kicks O’Reilly away but it sends him right over to Ciampa for a knock off the apron in a smart move.

Fish’s wheelbarrow suplex gets two on Gargano and it’s already time for the chinlock, complete with an appropriate fishhook. Gargano fights up and hits the tornado DDT/enziguri combination for the much needed breather but Fish is right there to pull Ciampa from the apron. As tends to be the case, the hot tag brings in Ciampa a second later and it’s time for the house cleaning as Ciampa is still great in this role. A knee in the corner sets up a Tower of London for two on O’Reilly and it’s time to roll some German suplexes.

It’s back to Gargano who gets caught in O’Reilly’s guillotine until Ciampa runs in with a knee to the head for the break. Gargano and O’Reilly strike it out with O’Reilly hitting a Dean Ambrose rebound lariat for a double knockdown and an NXT chant. Double tags bring in Ciampa and Fish with Ciampa teasing the German suplex off the apron. Instead it’s Gargano getting knocked to the floor, leaving Ciampa to take a super Falcon Arrow for a VERY close two.

The cross armbreaker is blocked so Fish adds a top rope headbutt to get the whole thing on. Gargano dives back in and shoves Fish onto the two of them for the break and they all head outside. O’Reilly hits a great looking running knee from the apron on Ciampa, who is right back up with a hanging DDT. Gargano’s slingshot DDT gets two on O’Reilly and it’s a dropkick to Fish, setting up Meet in the Middle to finish O’Reilly at 14:04.

The War Raiders come out for the staredown to end the show. 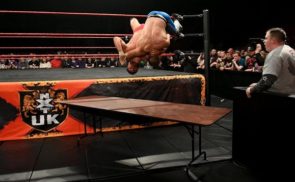 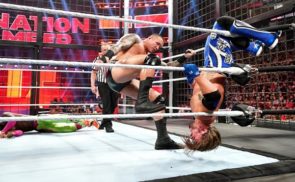