We’re back to the themed shows and this one has some potential, if nothing else for the set alone. How WWE waited twenty years to bring this back is beyond me, but we could be in for a very fun show this week. Or it’s going to be a big crossover between NXT and Chucky because he has to be around every year. Let’s get to it.

Chucky welcomes us to the show and runs down the card.

Hosts Shotzi and Quincy Elliott welcome us to the show.

Ladder match for the vacant title. It’s the normal brawl to start with Frazer sending the villains outside for the big dive onto Wagner. The first ladder is brought in but Mensah and Frazer get together to take Hayes and Lee down. With that broken up, Lee gets the ladder and starts cleaning house, including driving it into Wagner’s ribs in the corner. Wagner cuts off a climb but Mensah is there to go up. Frazer takes the ladder down but Lee rides a ladder down onto Frazer for the big crash.

Back up and Hayes hits Melo Don’t Miss into the ropes on Lee but Frazer hits a springboard reverse Spanish Fly onto the ladder. Wagner is back up with a chokeslam but Lee kicks him to the floor. Trick Williams comes in to turn the ladder over on Mensah, who lands on the top and dives onto everyone else. Williams and Mr. Stone use the chance to go up, with Williams hitting him with a shoe.

That’s enough to knock Williams down but he shoves the ladder over and Stone crashes to the floor. Wagner is back in to throw a ladder at Frazer and Mensah but Frazer is back up to put Wagner on a ladder. That means a frog splash to drive Wagner through the ladder for the big crash at ringside. Lee takes Hayes down and grabs the big ladder but Wagner picks him up and LAUNCHES HIM over the top and onto (not through) the announcers’ table.

Wagner goes up but Frazer springboards in to cut him off. With Wagner sent over the barricade, he does the big horror movie rise but gets laddered down again. Frazer and Mensah go up the ladder and slug it out until Frazer comes crashing down. Hayes is back in to pull Mensah into another ladder but Lee takes him down. This time it’s Lee going up but Hayes cuts him off on a ladder bridged between the rope and the standing one. Lee drops Hayes and manages to get up top for the win and the title at 16:03.

Last night, Alba Fyre challenged Mandy Rose to meet her in a graveyard, so Toxic Attraction jumps in the car and rides off.

We arrive at the graveyard, where Toxic Attraction is more than a little scared. They start walking around and head into a spooky old house and are all scared, with Jacy Jayne being left alone and finding what looks to be an old theater. Someone moves behind her and she screams.

We move over to Gigi Dolin, who winds up in the dining room where she finds….Chucky. Then someone in a mask with red hair jumps her and the fight is on, with Dolin using whatever she can to fight back. A door to the head rocks the woman, who is revealed as Alba Fyre. Dolin opens a refrigerator, finds someone inside, and is knocked inside by Alba. We cut to Mandy Rose, who kicks a monster low but gets jumped by Fyre as well. A baseball bat shot misses and Rose takes the bat away, only to get dropped again. Fyre says she isn’t like everyone else drives off. More on this later.

We recap Grayson Waller vs. Apollo Crews. Waller cheated to beat him but Crews used his psychic powers to see Waller getting hurt, which wound up happening. They have since Spun the Wheel, with the Deal being a casket match.

Casket match. Waller elbows him down to start but Crews does an Undertaker situp and stare. Crews takes it outside and moonsaults off the apron onto Waller, with the brawl heading up the ramp. A suplex drops Crews so hard that Booker says we’re watching “Nathan” Waller.

They fight over to the announcers’ table, where Waller gets in a shot with a pen to take over. They go to the top where Waller shoves him off and through the lid of the casket. Waller thinks he’s won….but then the lights go out. They come back up to reveal Crews coming down the aisle with the druids and another casket. Back in and Crews unloads on Waller, including a gutbuster to put him in the casket.

Waller fights out again and slams the casket lid on Crews’ head but they both wind up inside. They both fight out until Waller sends him back inside for the rolling Stunner. Waller does the Undertaker throat slit and tries a Tombstone, only to be reversed into a gutbuster. That’s not enough to put Waller in, so Crews slams him from the apron into the casket and wins at 12:35.

We go to Chase U, where Andre Chase isn’t happy with his students’ lack of knowledge about Halloween Havoc 1995. They also have a new student in Duke Hudson, who shows up Bodie Hayward. Chase expects more from Bodie.

Alba Fyre is on her way back, with Mandy Rose in the backseat.

Pretty Deadly and Kayden Carter/Katana Chance are backstage and ready to retain their Tag Team Titles.

Weapons Wild, more or less meaning street fight. Perez busts out a skateboard, which is what started the whole thing. The fight is on with Jade being taken down and put on the skateboard for a trip to the floor. Jade is back with some kind of spray to the face and a swing into the barricade.

Back in and Cora blocks her from grabbing a chair and puts a trashcan over her head. They head back to the floor where Jade puts on a reverse chinlock. That’s let go but Jade misses a chain shot, allowing Perez to dive on her and hammer away. Pop Rox is blocked back inside and they brawl to the floor again. The fight heads through the crowd and up into the balcony, where a Russian legsweep takes them down and through a table below. Back in and Perez hits Pop Rox onto a pile of chairs for the pin at 12:23.

NXT Deadline is on December 10.

Here is Shotzi, in Beetlejuice gear, to talk about how great tonight has been. She brings out Quincy Elliott, as a banana, for some puns. Lash Legend interrupts and says she should be hosting before Elliott says she’s not fabulous enough to host. Shotzi lays her out with a DDT and spanks a dancing Elliott.

Schism talks about trying to welcome more people to the hold and ask the person in the red hoodie if he/she is ready to reveal themselves. We’ll do that Tuesday. Then they all put on yellow masks.

We recap Damon Kemp ripping apart the Diamond Mine and Julius Creed agreeing to fight Damon Kemp for Brutus Creed’s future. Therefore, it’s an ambulance match with Roderick Strong still in a wheelchair lurking around.

Ambulance match for Brutus Creed’s career. Creed chucks pumpkins at him to start and hits a dropkick at the bell. A German suplex makes Kemp drop his chair and they crash out to the floor. They’re already at the ambulance and Creed throws him in but Kemp uses a crutch to block the door. Some crutch shots put Creed down and a suplex on the floor makes it worse.

A steps shot rocks Creed again but he gets away from Kemp without much trouble. Kemp slams the ambulance door on him but Julius kicks it into his face. They head back inside where Kemp plants him on the steps, meaning it’s time to pose. The fight heads outside where Julius ties him into a wheelchair with a crutch and rolls him around as the fans want a pumpkin used.

Instead Kemp puts him in a rolling cart to head towards the ambulance. Creed is sent inside, has the door slammed on his hands, but fights out again. They head back to ringside with Julius unloading on him with chair shots. A powerbomb onto a stretcher lets Julius take him to the ambulance for the win at 12:05.

The ambulance leaves and we see Alba Fyre, with Mandy Rose, arriving. Here we go.

Fyre is challenging and starts fast but gets shoved off the top to the floor. Back in and Rose slams her down for two before forearming away. With that broken up Fyre kicks her in the chest to take over. A spinebuster out of the corner gives Rose two but Fyre plants her down hard again.

Back up and a swanton plants Mandy but here is Toxic Attraction to pull the referee. Fyre kicks Jacy Jayne into the referee, meaning no one is there to count after Fyre hits the Gory Bomb. Toxic Attraction goes high/low on Fyre and the running knee is enough to retain the title at 7:05.

We recap the NXT Title match. Bron Breakker is champion, JD McDonagh (who Breakker has already beaten) won a #1 contenders match and Ilja Dragunov is here because he never lost the NXT UK Title. Now it’s a three way for the title, with Austin Theory teasing a Money in the Bank cash-in.

Breakker is defending and goes after McDonagh to start. Dragunov wants to beat on McDonagh as well but the delay lets McDonagh fight back up. With Dragunov on the floor, McDonagh slugs away on Breakker in the corner before Dragunov takes Breakker’s face. The slugout is on with McDonagh getting frustrated and whipping him into the corner. Breakker is back in with the belly to belly and sends McDonagh outside but charges into Dragunov’s boot to the face.

Everyone gets back inside and Dragunov knocks the other two into the corner, setting up a big Coast to Coast. Breakker is back up to slug it out with Dragunov and McDonagh applauds as they both go down. That’s too far for the other two as they knock McDonagh back and forth before tossing him outside. Breakker and Dragunov clothesline each other and McDonagh is back in to slowly go up top.

The delay is enough for Breakker to Frankensteiner him into a powerbomb from Dragunov and they’re all down again. It’s McDonagh up first to send them outside for the big moonsault to the floor. Back in and Dragunov powerbombs Breakker for two but McDonagh is in with a 450 for two on Dragunov. Breakker manages to German suplex both of them at the same time and then hits the gorilla press powerslam on Dragunov.

McDonagh steals the cover and gets two but Breakker isn’t happy with the thievery. With McDonagh on the floor, Breakker’s spear is cut off with Dragunov’s jumping knee. A top rope backsplash sets up the Torpedo but McDonagh grabs the referee at two. Dragunov chases McDonagh to the floor and walks into a Spanish Fly. McDonagh tries to crush Dragunov’s ankle on the steps but misses, allowing Dragunov to hit a Torpedo off the steps. Back in and Breakker spears Dragunov to retain at 23:50. 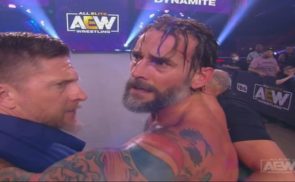