We’re still coming out of Bound For Glory and that means it is time to start getting ready for whatever the next monthly special is going to be. In this case, that means Frankie Kazarian is going to cash in his X-Division Title for a World Title shot against Josh Alexander. That is likely going to mean some competition for the vacant title and it might start tonight. Let’s get to it.

The Bullet Club goes to see Ace Austin but find him down in the parking lot. Tommy Dreamer is here but denies everything.

It’s Chris Bey/Juice Robinson here, with Robinson putting on his wrist tape on the way to the ring (as he is replacing Austin). Dreamer sends Bey to the apron to start but it’s quickly off to Robinson to stomp Ray down in the corner. Some rapid fire chops in the corner have Robinson in trouble of his own but he comes back with the snap jabs to Dreamer. Bey comes back in and tries the Art of Finesse but gets reversed into a cutter. The hot tag brings in Ray as there are a lot of empty seats directly across from the camera. Robinson plants Ray with a spinebuster but it’s the Bully Bomb to give Ray the pin at 6:21.

Heath and Rhino are ready to win the Tag Team Titles.

In the back, Tommy Dreamer wants to know that Bully Ray did not lay out Ace Austin. Of course not, as he was a minute ahead of Dreamer, so how would he have had a chance? Moose comes in to say Ray is once a scumbag and always a scumbag. Dreamer wants Moose thrown out but Moose says if he attacked Austin, you would have known.

They trade armdrags to start and try stereo dropkicks, leaning us with a standoff. Wilde pulls her into an armbar but Yim is back up with a basement dropkick to put Wilde in a good bit more trouble. We take a break and come back with Yim getting two off a clothesline and getting frustrated at the kickout.

A bow and arrow has Wilde in more trouble but she manages to block Eat Defeat. Some rollups give Wilde two each and Yim is frustrated but she still can’t hit Eat Defeat. Back up and the Wilde Ride, a bridging German suplex is enough to give Wilde the rather upsetting pin at 12:51.

Post match Mickie James comes out to praise Wilde. The challenge is….not on as VXT and Gisele Shaw come in for the beatdown. Jordynne Grace makes the real save.

Post break the six Knockout tag challenge is sent out.

This seems to be the result of Hendry taking Hotch’s Call Your Shot spot and almost his girlfriend. Before the match, Hendry thinks these people believe in him and then shoulders Hotch down. A suplex drops Hotch again and the spinebuster gives Hendry the pin at 1:58.

Flashback Moment of the Week: Chris Sabin b. Bully Ray to win the World Title via Option C.

Here is Scott D’Amore to accept the X-Division Title from Frankie Kazarian in exchange for a World Title shot. Kazarian comes out and hands over the title, with D’Amore saying there is no turning back. There will be an eight man title tournament starting, with the finals taking place at Overdrive. Kazarian talks about winning his first X-Division Title back in 2004 and how important it was to him.

Since then, he has gotten married and had a son, but he still feels unfulfilled. He has looked at the names of former champions and while there are legends, there are people he is better than and that isn’t ok. The title cash-in is official so here is Steve Maclin to jump him from behind. Cue Josh Alexander for the save though and the good guys stand tall.

Eddie Edwards arrives and Honor No More wants to know his decision. He tells them, and his wife Alisha, that they’ll find out what he’s doing.

Frankie Kazarian isn’t happy with Josh Alexander for saving him. If he needed a partner, they would be here. For now though, don’t trust Bully Ray.

Deaner is here with Young. Swann jumps him to start but gets dropped with the wheelbarrow neckbreaker. Young takes it to the mat and grabs a chinlock but Swann is back up with a kick to the head. The piledriver is blocked and Swann grabs a handspring cutter. A Deaner distraction looks to set up the piledriver but Swann reverses into a rollup for the pin at 3:12.

Post match one of the yellow hoodied guys runs in to help with the Swann beatdown but Sami Callihan pops in for the save.

The Major Brothers are back and they want the Tag Team Titles.

Here are the brackets for the X-Division Title tournament:

Heath and Rhino are challenging. Rhino runs Bennett over to start and hits a clothesline to the floor. Heath comes in and pounds on Bennett in the corner and a double elbow drops him again. It’s off to Taven to knock Rhino into the corner to take over and the alternating stomping begins. The champs do the fake tag thing to stomp on Rhino’s knee, with a big shot getting two as we take a break.

Back with Rhino still in trouble and Taven grabbing a Russian legsweep. Rhino fights out of trouble and brings Heath back in to start the comeback. Bennett’s discus elbow gets two on Heath and everyone is down for a bit. Cue the rest of Honor No More (minus Eddie Edwards), allowing Maria to throw powder….into Bennett’s face by mistake. The Wake Up Call drops Bennett and Rhino Gores Maria by mistake, setting up another Wake Up Call to finish Taven for the pin and the titles at 13:32.

Post match here is Eddie Edwards, with the fans telling him that he got beat. Alisha has given him an ultimatum to either get rid of Honor No More or save her marriage. The question is whether Honor No More is worth saving, because he sees failure after failure. Eddie asks if the team is loyal to the cause, focusing on PCO. Edwards: “PCO IS NOTHING BUT A B****!” That’s too far for PCO, who wrecks everyone, including Vincent and Edwards, to end the show. 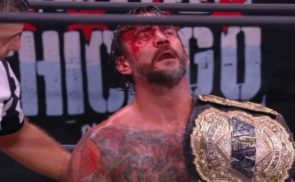