It’s Thanksgiving and that means we are in for a special Best Of show around here. That’s about as logical as you’re going to get for this time of year as there is no reason to believe that anyone is going to pay attention to a show on such a big holiday. You never know what you’ll see on something like this but let’s get to it.

The hosts welcome us to the show and promise us some great Thanksgiving moments, plus a look at Overdrive.

We’ll start with Thanksgiving 2008, with Rhino pinning Alex Shelley in a triple threat match also involving Sheik Abdul Bashir. As a result, Rhino gets $25,000 and Shelley has to wear a turkey suit, as enforced by Mick Foley with threats of firings/bad history lessons.

Wrestlers say what they are thankful for (Joe Hendry is thankful for mirrors because he gets to see who he really is).

Deaner asks Eric Young if this is the end of Violent By Design but doesn’t get an answer. It’s time for an answer to the unanswered questions so they have to go back to where it all began.

We go back to Thanksgiving 2007, at the Angle household, featuring Kurt and Karen as pilgrims and Jeremy Borash, Tomko and AJ Styles as guests (it was a weird time). They pray (with gold medals on the plates) and Styles eats during the prayer. People keep opening their eyes during the prayer, with Karen and JB making faces at each other. Robert Roode and Traci Brooks come in, as do James Storm and Jackie Moore (with beer). Chris Harris arrives and complains about the directions.

Eric Young shows up, a bit under dressed, and breaks a bunch of stuff. Kurt stands up to yell, revealing that he’s wearing the World Title, and sends Eric to the kid’s table (Eric gets lost on the way). Then the X-Division arrives, with Sonjay Dutt trying to get donations for starving children. Storm and Young get in a drinking contest and Styles leaves as Black Reign (Dustin Rhodes) and Rellik arrive. Reign lets his rat Misty into the food and we take a break.

Back with Young and Storm rather drunk (Young has found a wig and they have both lost their shirts). Jay Lethal (as Black Machismo) arrives as Kurt looks like he wants some cyanide. Then So Cal Val arrives, so Lethal gives her his jacket to walk on. Kurt tries to restore order as Awesome Kong shows up and sits at the other end of the (really long) table. She eats food that may or may not be wax and, since there are a bunch of tables, Team 3D arrives, with food being thrown at them.

A bunch of people leave to get away from Team 3D, who were invited by someone other than Kurt. They sit at the kid’s table and take food from Kurt’s daughter, who says they suck. Then Kevin Nash and Scott Hall arrive and Karen takes pies to the face. Everyone else shows up and the food fight is on.

We look at Mickie James beating Taylor Wilde at Overdrive. Then Deonna Purrazzo comes out to yell at her and sets up the next match in James’ Last Rodeo.

They slug it out to start with Grado getting the better of it off the snap jabs. A double clothesline puts both guys down as this is a little less funny than I was expecting. Robbie grabs a rollup for the pin at 2:39.

We look at the end of Josh Alexander beating Kazarian with the C4 Spike to retain the World Title at Overdrive. Then Bully Ray came out, announced he was officially challenging at Hard To Kill in January, and beat up Alexander in front of his family. Then, with Alexander zip tied to the rope, Ray pulled Alexander’s wife over the barricade….and just threatened her because Alexander was loose. After the show, Ray grabbed the title but Rich Swann came out for the save. Scott D’Amore came out and threw stuff at Ray while asking what was wrong with him.

Here are all of the winners of the matches tonight plus Velvet who is with Sabin. Roode points this out and Sabin throws Velvet out. Bobby asks everyone what they’re thankful for. Bad Influence is thankful for their intelligence and large endowment. Kaz is thankful that Park isn’t here to drink the gravy or fornicate with the pumpkin pie. Gail is thankful for being the prettiest and most dominant Knockout in the history of the company. Oh and her family too.

Sabin is thankful for his hair, being the best X-Division Champion ever and Velvet Sky. The Bro Mans are thankful for Mr. O Phil Heath, Zema Ion (officially part of the team) and for being the best team ever. Bad Influence: “I’m not sure about that.” Roode says the real Thanksgiving was last month in Canada and the fans will be thankful when he becomes the next champion.

It’s time to eat but here’s Angle to interrupt. He sees a ring full of turkeys, which are fighting words for the people in there. Roode challenges him to a fight which Angle accepts, and here’s his backup. Fernum and Barnes (a couple of losers who lost the Turkey Bowl) are still in the turkey suits. You can fill in the blanks yourself here: bad guys are destroyed, food is everywhere, Spud panics, turkeys fly. The good guys, Velvet and ODB celebrate to end the show.

We look at Kenny King going after Mike Bailey at the overdrive pre-show and losing a six way match as a result.

King is going to take out Bailey before going after the X-Division Title.

Garza gets punched down though and it’s time for the heel beatdown. Adonis comes in for two off a legdrop and it’s time for a bearhug. That goes nowhere and the hot tag brings in Eddie to clean house. Everything breaks down in a hurry and KM gets crushed between Justice and Bahh.

Post break, Adonis refuses to wear the suit. Security actually stops him as the referee holds up the suit like an executioner’s ax. After a lot of persuading and a GOBBLE GOBBLE chant, Adonis finally puts it on and walks around a bit. Adonis isn’t cool with the chants though and the required food fight, with Adonis hitting Drake in the face with a pie, ends the show.

Delirious and Yuyu Uemura yell at each other in….something and Japanese.

Steve Maclin wants the World Title but he is being held captive by his own company. From now on, it’s mayhem for all.

This is the finals of the Turkey Bowl, with the winner getting $25,000 and the loser wearing the turkey suit. Joe and Sabin double team Styles to start and knock him to the floor. That leaves Sabin to take Joe down but a kick misses, giving us a staredown. Styles gets knocked to the floor again and we take a break.

Back with Sabin charging into a hot shot but Joe comes back in to punch Styles in the face. Styles breaks up the suicide elbow to Sabin though, meaning Joe punches him in the face some more. The drop down into a dropkick hits Joe and we take a break. Back again with Joe countering the springboard moonsault into an Air Raid Crash with Sabin having to make a save.

We take another break and come back again with Sabin hitting a springboard DDT to drop Joe. That earns Sabin a trip to the floor but Styles Peles Joe. The charge into the corner only hits kick to the face though, allowing Joe to hit the Muscle Buster for the pin at 9:33 shown (of the nearly thirty minute match).

Post match we cut to a livid Kurt Angle (AJ’s boss), storming out of his own Thanksgiving dinner. Back in the arena, AJ won’t put the suit on so here is Jim Cornette to order him to do it. After some coaxing, Styles (very slowly) puts the suit on so Tomko and Kurt come out to yell. Samoa Joe and the Outsiders come out to laugh at Angle and pals, meaning the brawl is on. The bad guys are cleared out, with Eric Young coming in to add a turkey leg to Angle to wrap things up. Then Hall got fired and Joe was given a live mic at the pay per view where he went on a rant against a lot of people. 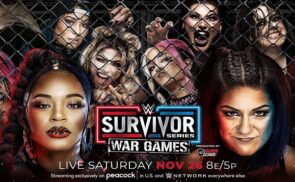 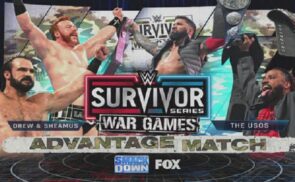