We are back to the regular show after last week’s Thanksgiving special. That means we need to start getting ready for whatever the December show will be, plus Hard To Kill. The latter of these shows will likely be headlined by Bully Ray challenging Josh Alexander for the World Title, but we need something else besides that. Let’s get to it.

The opening recap looks at Bully Ray teasing being good and then going all evil as he goes after the World Title.

Here is Bully Ray, complete with the broken Call Your Shot trophy to get things going. He isn’t sure if these Kentuckians will understand him so he tries to keep it simple. Ray shows up at Bound For Glory, ran the gauntlet, and earned the title shot. He told Josh Alexander that he was coming for him on January 13 and they shook hands, with Alexander accepting the match. The fans chant for Alexander, which has Ray saying he agrees with these morons.

As great of a wrestler as Alexander is, he isn’t as smart as Ray. Maybe people have forgotten who he is. He ran Hulk Hogan out of Impact, he made sure Sting couldn’t challenge for the World Title again and he put Dixie Carter through a table. So why would Alexander let his wife get that close to Ray? Alexander is going to be gone for a few weeks, but he better be at Hard To Kill so Ray can win the title for the third time. Cue Rich Swann to jump Ray and start their scheduled match fast.

We’re joined in progress and Ray runs Swann over to cut him off. Ray hammers away in the corner and elbows Swann in the head as the ring has a weird echo for some reason. A sitdown splash misses for Ray but he’s fine enough to crotch Swann on top. The neck crank is countered with a jawbreaker and the middle rope 450 gives Swann two. That’s enough for Ray, who grabs his chain and blasts Swann for the DQ at 5:43.

Post match Ray beats on Swann with a chair and zip ties him to the bottom rope. Tommy Dreamer runs out for the save but Ray shoves him down. Cue Scott D’Amore to yell at Ray and hit him with his suit jacket. Ray grabs the chair again but gets chased off by the combined forces of….D’Amore and Dreamer. Hold on though as Ray grabs the mic and agrees with D’Amore than he’s a piece of s***. Ray: “But you’re the guy who hired me.”

Trey Miguel doesn’t care that people are unhappy with him and he spray paints his logo on the X-Division Title.

Moose is sent into the corner to start and Gujjar strikes away, even managing to send Moose outside. That works fine with Moose, who blasts him with a clothesline as we take a break. Back with Gujjar winning a slugout but getting planted right back down. A ripcord knee and Sling Blade look to set up the Gargoyle Spear…but Moose just steps aside. The spear gives Moose the pin at 7:53.

Post match Moose throws Gujjar outside and then talks about knowing what Bully Ray really was. These idiot fans wouldn’t listen to him though and no, he didn’t lose at Overdrive. Moose: “I don’t want any of you to say his name.” Cue Joe Hendry but Moose says he was talking about Bully Ray. Hendry heard “say his name” and that is the same as someone saying WE BELIEVE. Moose wants Hendry out but Hendry, from a current champion to a former one, knows a cry for help when he hears one. The fight is on but Gujjar is back with the Gargoyle Spear.

Mike Bailey isn’t worried about Kenny King and nothing is changing.

Video on Mickie James and the Last Rodeo, as she is ready for Deonna Purrazzo tonight. Purrazzo is ready to end James’ career.

Maclin wins an early slugout but Kazarian is back with a springboard elbow to the face. That doesn’t last long as Maclin knocks him out to the floor in a heap and a running knee to the back makes it worse. Kazarian slips out of an Angle Slam though and some running forearms have Maclin reeling.

The chickenwing is blocked so Kazarian settles for the springboard spinning legdrop for two instead. The slingshot Fameasser over the middle rope keeps Maclin in trouble and he slingshots himself into a cutter for two more. Then Maclin hits him with a chair for the DQ at 7:20.

Result: Frankie Kazarian b. Sheamus via DQ when Sheamus used a chair (7:20)

Post match Maclin wrecks Kazarian, including the KIA on a chair.

Tasha Steelz rants about the Death Dollz winning the Knockouts Tag Team Titles at Overdrive and seems to blame Savannah Evans. That doesn’t work for Evans, so Steelz says we can do Evans vs. Taya Valkyrie next week.

Eddie Edwards is done talking about his marriage or PCO or anything in the past. He did everything to build for the future….and then runs into Delirious of all people, who stares at him.

The Motor City Machine Guns ask Heath and Rhino about their Tag Team Title shot. Heath says they’ll get it set for next week, which works for the Guns. Rhino talks about tearing their hearts out.

Feeling out process to start with Purrazzo taking her to the mat to start and working on an armbar. Back up and they trade armdrags into a pinfall reversal sequence. They both miss some kicks and it’s a standoff as we take a break. We come back with James taking her into the corner for some chops, followed by some rams into the turnbuckle.

That earns her a hard elbow to the face and more elbows to the chest give Purrazzo two. The chinlock goes on for a bit but Mickie is right back up with the hurricanrana out of the corner. A running kick to the chest gives James two but Purrazzo kicks her off the top as we take a break. Back with Purrazzo getting two off a brainbuster and grabbing the reverse chinlock.

That’s broken up and James sends her outside, setting up the Thesz press to the floor. A missile dropkick drops Purrazzo and a neckbreaker gives James two. The tornado DDT is blocked and Purrazzo’s pump kick gives her a near fall of her own. The Fujiwara armbar goes on but Mickie gets over to the rope fast enough. They trade rollups until James grabs the tights for the pin at 23:00.

Post match Jordynne Grace comes out to praise James and issue the challenge for the title vs. career match at Hard To Kill. We’re on. 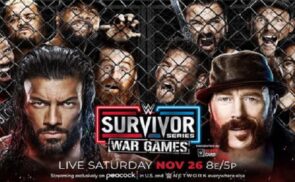 No Wasting Time: WWE Considers Changes For Next WarGames Match