We’ll wrap up the month here as MJF should be here for the first time as World Champion. That alone should be a heck of a moment, but we also need to get more of the build towards Final Battle out of the way. There isn’t much set for the show but that should change this week. Let’s get to it.

Here is Jon Moxley to get things going. He talks about working to get here and what a wild ride it has been. There are three constants in life: death, taxes and Jon Moxley. No one can out work him, out fight him, out wrestle him or anything else. There is not one man who has the guts to come out here and tell him any different….and here is the returning Hangman Page. Moxley asks if Page wants to do this after what happened, if he can remember it. Page comes up swinging and the fight is on, with referees and security needing multiple attempts to break it up.

They go technical to start as the fans are way into this from the opening bell. It’s too early for either to get very far with a leglock so Danielson bails to the floor to start. Back in and Danielson tries the moonsault over into the running clothesline but Harwood is ready for him instead. Danielson sends him over the top to set up the suicide dive to send Harwood into the crowd. They slug it out from different sides of the barricade and we take a break.

Back with Harwood rolling some German suplexes before teasing a right hand to set up the piledriver for two. Harwood’s headbutt misses though and Danielson grabs la majistral for two. They head outside again and Danielson’s apron knee to the face knocks Harwood silly. Back in and Danielson can’t hit a superplex so he tries a belly to back version instead.

That’s fine with Harwood, who turns it into a high crossbody for two, leaving both of them down again. The slugout is on again until Harwood pulls him into a half crab. Without that broken up they hit the pinfall reversal sequence until Danielson gets the LeBell Lock for the tap at 14:42.

Ricky Starks is ready to win the World Title.

Hangman Page and Jon Moxley are still fighting in the parking lot.

We get a sitdown interview between the Jericho Appreciation Society (minus Chris Jericho) and the Blackpool Combat Club. The Society mocks Wheeler Yuta but Castagnoli is asked about the Final Battle main event. Jake Hager things Castagnoli would be a great sports entertainer and throws him a hat. That doesn’t go well for Castagnoli who snaps and yell about how he’s sick of this. Castagnoli leaves, so the Society issues the challenge for a tag match. Yuta accepts on Castagnoli’s behalf but he’ll take a Pure Title shot at Final Battle too.

Joe is defending and hammers Fox down in the corner to start. Fox comes back up with some shots to the face, only to have his legs swept out so Joe can drop a backsplash. We take a break and come back with Fox breaking up the Musclebuster. A diving tornado DDT rocks Joe and Fox kicks him in the face. Fox hits a 450 for two but Joe walks away from a Swanton attempt. The Musclebuster retains the title at 6:39.

Post match Joe declares himself the king of television but Wardlow pops up on screen to say enjoy it while it lasts, because this is Wardlow’s World. Joe looks a bit concerned.

We go back to Oakland, California where Powerhouse Hobbs walks past some gambling and goes inside some kind of store.

Here is William Regal, with something under a sheet, to introduce MJF for his first comments as World Champion. MJF talks about how Regal sent him an email not too long ago, saying that MJF had become weak after he had been beaten down by the Firm. Regal thought MJF could become the best villain of all time, but Regal wanted to see MJF grab the brass ring. They met behind closed doors multiple times after that and MJF admits that Regal is a genius. Regal wanted MJF to use the brass knuckles at Full Gear so they would leave an emotional scar on Jon Moxley.

As for the Firm…..eh. He would have done the same thing, but chasing them down takes effort and that is for poor people like these fans. Speaking of things beneath him, we have this title, which makes him sick (and not just because he is in Indiana). The people who have held it before aren’t o his level, which is why the title is garbage. MJF throws it down and Regal unveils the new belt, which has the Burberry strap design.

No one deserves the title except for him, including the people these fans cheer for. MJF means people like Eddie Kingston, Ricky Starks or Bryan Danielson. Sure Danielson can wrestle his way out of a paper bag but that doesn’t mean he deserves to be a World Champion. MJF praises his boys up north, Jolly Old Saint Nick and Trips. So what happens on January 1, 2024? Maybe Hollywood wins instead of either promotion.

Anyway, the fans are going to get sick of him as champion but they’ll keep tuning in to see who can take the title off of him. During his title reign, the championship will be defended very rarely because he is a special attraction. Nine times out of ten, you’ll have to buy a pay per view to see him wrestle because his title reign is going to make Hulk Hogan, JBL and Jeff Jarrett’s seem short.

As for William Regal…..MJF knocks him silly from behind with the brass knuckles. Schiavone: “STEVE REGAL….WILLIAM!” MJF says Regal thought he had a lot to learn, but Regal is the one who made a deal with the devil. As Regal said a few years ago, when you’re a world class talent, send him your stuff. Danielson and medics run out to check on Regal, who is put in a neck brace and taken out on a stretcher.

Before the match, Ethan Page and Stokely Hathaway come out, only to have Matt Hardy interrupt. Hathaway tells Hardy to get to the back as Starks tells Hardy to help him win the Dynamite Diamond Ring battle royal next week. Then Page is cashing in the match he gets on MJF after Starks’ title shot at Winter Is Coming. Daivari jumps Starks but gets speared and Roshamboed for the pin at 22 seconds.

Jamie Hayter, Britt Baker and Rebel tell Tony Schiavone that they will be having their own sitdown interview next week on Dynamite, just like Saraya this week on Rampage.

Tay Melo is here with Jay. Nightingale takes her down for an early two and hits a backsplash in the corner. After some dancing, Nightingale hits another backsplash, only to miss a clothesline. Jay hits a running spin kick in the corner and we take a break. Back with Nightingale making the comeback, including a spinebuster for two. Jay grabs a quick Gory Bomb for two but Nightingale blocks what looked to be a Rock Bottom. A rollup gives Jay two instead but Nightingale plants her with a doctor bomb for the pin at 7:32.

Post match Ruby Soho makes her return and goes after Anna and Tay.

We look back at the return of the House of Black.

QT Marshall wants an All Atlantic Title shot and Orange Cassidy gives him whatever he wants with no discussion. We’ll even make it a lumberjack match. Marshall is almost annoyed at how easy that was.

Here are Jade Cargill and the Baddies for a celebration of her retaining the TBS Title. Jade talks about getting rid of the trash last week (when Kiera Hogan was fired) but wonders why the Baddies were spending time with Hogan this week. Either get in line or leave, because they eat off of her. Jade brags about how awesome she is and how she makes careers. Speaking of careers, Bow Wow is a joke…and Bow Wow pops up on screen. He’s done with his tour so he’ll be around soon. That title she has does something to him, which seems to have Jade a bit shaken.

The Acclaimed are drilled by Billy Gunn about why they don’t have a match this week. Therefore they will give a Tag Team Title shot to the best team in AEW on Rampage. Gunn wants to know how that is possible when they’re already the best. Ok then we’ll make it the second best team. Scissoring ensues.

Match #3 in the best of seven series, with Death Triangle up 2-0. The Elite jumps them in the aisle and the big brawl is on, only to have Pac superkick Omega out of the air as we take a break before the opening bell. Back with the fight still on the floor and the opening bell ringing. Penta cleans house and the referee gets taken out, leaving Penta to whip out the hammer.

Fenix won’t let that happen and Omega V Triggers him down, only to have the Elite come back with superkicks. The snapdragon drops Fenix but Death Triangle hit superkicks of their own. Death Triangle go up top for moonsaults to the Bucks and a double stomp to Omega. The Fear Factor gets two on Omega but Nick saves him from the Black Arrow. Matt suplexes the Bros down, leaving Pac to get up for the staredown with Omega. One heck of a super Falcon Arrow gives Pac two and we take a break.

Back with Pac snap German suplexing Omega, who blasts him with a clothesline. Fenix comes back in and has to escape the Meltzer Driver. A 450 gets two on Fenix instead with Penta making the save. Everything breaks down and Matt gets planted, leaving Penta to dive onto Omega and Nick as Penta gets two. Pac’s brainbuster gets two on Matt so it’s time to go up again. Pac loads up the Black Arrow but lands on Matt’s knees (to the banged up face) to give Matt the pin at 12:15.

Post match Omega says there wasn’t going to be a sweep with the Cleaner around. 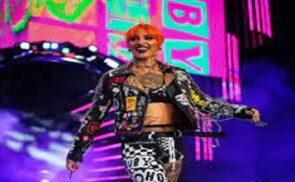 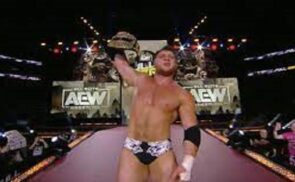