It’s week three of the GFW era in TNA and there’s a chance that Jeff Jarrett is going to take over as the full time boss. There is no way this could go badly for TNA of course. Other than that we have Eric Young vs. Chris Melendez for Chris’ leg because they need something to keep the feud going. Let’s get to it.

We open with a quick recap of all the GFW stuff so far.

Here are the Hardys to open things up. Jeff says he’s glad to be back and talks about the gold they’ve won everywhere. He knows Matt will be the next World Champion so Matt thanks all of the fans for their support. Matt reiterates that he wants the title so here are Ethan Carter III and Tyrus to respond.

Ethan talks about meeting the men who inspired him to start wrestling in 1999 and being so disappointed. Now he’s beaten Matt in Matt’s own match and Jeff is just a daredevil who can’t stick a landing. Jeff offers to beat him with a chair since he can’t wrestle yet, but instead Ethan just grants Matt his rematch request. However, if Ethan retains, Jeff becomes his personal assistant.

Young says he can’t be held responsible for what happens next.

Young quickly takes over to start and tries to rip the leg off early. Instead he settles for a chinlock but Melendez fights up with some clotheslines. A Bubba Bomb puts Eric down but he rakes the eyes to keep Chris in trouble. The piledriver is broken up so Young rolls him up and puts his feet on the ropes for the pin at 3:15.

Result: Eric Young b. Chris Melendez – Rollup with feet on the ropes (3:15)

Young demands the leg right now and Melendez hands it over, only after hopping along because Young keeps backing up.

Tigre is defending and there’s no story here. DJZ dropkicks Tigre to the floor to start but walks into a hurricanrana. Sonjay sends him out to the floor and nails a flip dive off the apron. Back in and Tigre misses a corkscrew moonsault, allowing DJZ to come back with a quick gutbuster to the champ. Dutt comes back in for a tornado DDT on the champ but the challengers clothesline each other to put all three guys down. DJZ is up first but gets German suplexed into the corner, setting up Tigre’s springboard splash to retain at 5:03.

James Storm demands that Manik and Abyss win the Tag Team Titles and no more dancing from Manik.

Recap of the opening segment.

Abyss/Manik are challenging. Davey and Abyss get things going and the monster shoves the champ down with ease. It’s off to Eddie to try his luck to little effect as Abyss pounds on him as well. Manik comes in and gets beaten up in the corner. Davey gets dragged into the Revolution’s corner though and Abyss comes back in to choke in and splash. Manik gets two off a belly to back and it’s time to crank on the arms.

A dropkick stops Davey’s comeback as Josh talks about Wolves Nation. Davey finally gets over for the tag so Eddie can clean house, only to have Abyss grab both champions by the throat. The Wolves backflip out and kick Abyss down, setting up a double missile dropkick in the corner. Cue Storm to break up whatever the Wolves had planned but Mahabali Sheera comes out to chase Storm off. The powerbomb into a backstabber is enough to put Manik away and retain the titles at 6:19.

Jeff Hardy accepts Ethan’s challenge. This could have been tacked on to the first segment to save some time.

We recap Jeff Jarrett’s return to the company.

Brooke is defending. Feeling out process to start with neither being able to get much of an advantage. A Russian legsweep gets two for the champ and she forearms Velvet down with a hard shot. Velvet comes back with a running neckbreaker for tow but they clothesline each other down. Brooke knocks her to the floor but doesn’t want a countout. Instead she whips Velvet into the steps but here’s the Dollhouse for the DQ at 3:54.

Result: Brooke b. Velvet Sky via DQ when the Dollhouse interfered (3:54)

The beatdown is on but here’s Rebel of all people to….join the Dollhouse and help beat Velvet down as Taryn laughs from the back.

Drew Galloway gets bad news on the phone.

Mr. Anderson vs. James Storm vs. Bobby Roode vs. Lashley

Winner gets PJ Black for the King of the Mountain Title next week. It’s a brawl to start and all four head outside to fight. Roode can’t suplex Lashley on the ramp so Lashley and Anderson clean house, only to turn it into a standoff as we take a break. Back with Roode and Storm having an old school standoff to a smattering of applause. Dinero: “They’re facing off…..again.”

Roode gets two off a quick neckbreaker but Anderson breaks it up. Lashley is back in as well for a superplex to Storm. Anderson misses a swanton bomb and gets clotheslined by Storm but they both head outside. Lashley turns Roode inside out off a clothesline but Roode knees out of a delayed vertical. The Roode Bomb is blocked by a grab of the ropes, only to have Storm come back in with a Codebreaker.

Anderson’s swinging neckbreaker puts Storm down and the Mic Check gets two on Roode. Lashley spears Anderson to the floor, only to charge into the Last Call. We’re down to Roode vs. Storm again and the Beer Money chant sets up a double suplex on Anderson. They load up the signature taunt but the Roode Bomb plants Storm for the pin at 13:30.

Velvet Sky, Gail Kim and Brooke are all on the cover of the calendar. So much for the competition.

Ethan is happy with the Hardys’ decision.

Here’s Dixie for the big announcement about Jarrett being in charge going forward. She says the best times in this company’s history have been when two people are working together on top. Jeff is invited to the ring and thanks Dixie for that surprise phone call a month or so ago. They have something special going with this partnership and Dixie believes they’re unstoppable when they work together. This brings out Drew Galloway with news as we go to a break.

Back with Drew going on about the dark cloud of the attacks over TNA. After praising Jeff, Drew thinks it’s weird that there are no clues, but he put his criminology degree to use and said there’s only one clue: the license plates of the getaway cars. And what do you know: they’re both registered to Jeff Jarrett. You know, the guy he was praising a minute ago.

Jeff says no way but here’s Karen Jarrett to say she did it for her husband, her family and for GFW. She says one little spark can cause a giant inferno. With that, Jeff kicks Drew low and here are the GFW guys to beat Galloway down. Some TNA midcarders run out for an attempt at a save but get beaten down as well. The Wolves take a beating too and GFW poses to end the show.

Results
Eric Young b. Chris Melendez – Rollup with feet on the ropes
Tigre Uno b. DJZ and Sonjay Dutt – Springboard splash to DJZ
Wolves b. Manik/Abyss – Powerbomb/backstabber combo to Manik
Brooke b. Velvet Sky via DQ when the Dollhouse interfered
Bobby Roode b. James Storm, Lashley and Mr. Anderson – Roode Bomb to Storm 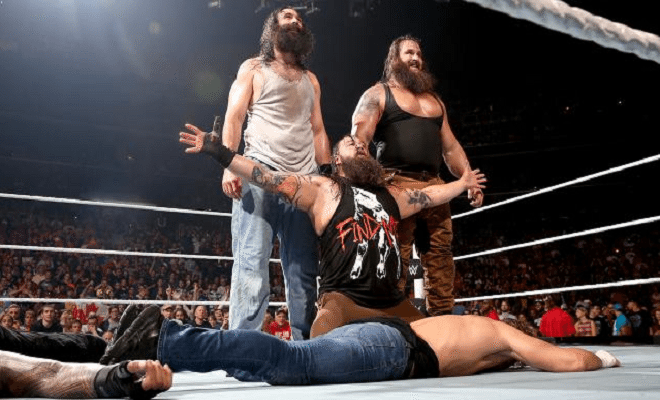 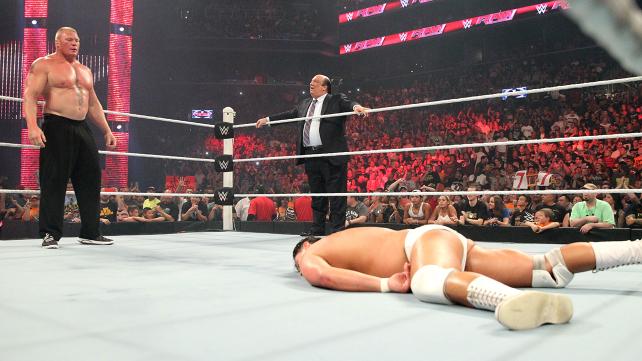