It’s another Friday and Jon Moxley is back in the ring. That should be enough to make the show work, but we also have a pair of title matches, as Jade Cargill defends the TBS Title against Julia Hart and Private Party challenges for the Tag Team Titles. That’s not bad for an hour so let’s get to it.

Moxley gets a great ovation and Caster’s rap is about every thing happening to Moxley as of late, save for his rehab. Moxley jumps Bowens before the bell and beats him up, including taking it to the floor. He even stops to bow to and pose with referee Aubrey Edwards. The fight goes into the crowd with Bowens getting beaten up out there too. Back to ringside with Bowens managing to post him to slow things down.

They get back in with Bowens starting in on the arm but Moxley fights out of a suplex. Bowens neckbreakers him back down though and we take a break. Back with Moxley’s super Paradigm Shift being countered though as Bowens takes him down again. Moxley sends him outside and hits a suicide dive onto Caster, only to have Bowens catch him on the way back in.

A twisting hanging DDT drops Moxley for two but Bowens is back with a series of strikes. Moxley grabs a quick piledriver for his own two though and they’re both down. Bowens knees him in the face for two and hits a kind of belly to belly for the same. Caster throws in the boom box but it gets taken away, allowing Bowens to pull out a chain. Moxley isn’t having that and knocks Bowens silly, setting up the Paradigm Shift for the pin at 13:04.

Bryan Danielson is watching Moxley from the back.

Nyla Rose is ready to destroy Ruby Soho on Dynamite.

Arn Anderson and Tully Blanchard are here too. Johnson uses some power to slow Wheeler down to start before it’s off to Harwood, who can’t do much with Anderson. Brock slips out of a headlock and teases a right hand, making Harwood pause for a breather. Everything breaks down and FTR is sent outside for a pair of dives from Johnson. We take a break and come back with Johnson hitting a neckbreaker but Wheeler cuts off the hot tag attempt.

Then the tag goes through to Anderson a few seconds later, meaning it’s time for the comeback. A suplex takes Harwood down and it’s a gutwrench suplex to plant Wheeler. Harwood gets knocked off the apron, leaving Wheeler to get DDTed. A spinning frog splash gives Johnson two, with Wheeler having to put a foot on the rope. Anderson gets taken outside, leaving Tully to get into a staredown with Arn. Tully gets punched out, but it’s a spike piledriver to finish Johnson at 9:57 back inside.

Thunder Rosa and Mercedes Martinez are ready to end each other next week.

We look at Serena Deeb beating up Hikaru Shida and putting her on the shelf.

Cargill is defending and doesn’t seem to mind when Hart jumps her early on. Hart’s forearms are shrugged off and Cargill gets in some situps. Back up and Hart charges at her in the corner, setting up a hurricanrana for two. That earns her a kick to the face, setting up Jaded to retain the title at 2:24.

We get the face to face interview, with Christian Cage mocking Matt Hardy’s handling of Private Party. Matt yells back at him, with Jungle Boy saying there is no comparison between the two of then and they’re about to prove it.

Private Party is challenging and has more of the AHFO outside. Before the bell, the champs get in an argument with the Gunn Club at ringside, allowing Private Party to jump them from behind. It’s Gin and Juice for an early two on Jungle Boy and a neckbreaker gets the same as we take an early break.

Back in and Kassidy hits an enziguri for two, which sets up a Doomsday Device. That’s fine with Jungle Boy, who counters into something like a tabletop suplex to send Quen crashing down. Luchasaurus comes back in but gets taken down by the Silly String for two. The Snare Trap goes on but Quen breaks it up with the shooting star (with commentary thinking that might have taken a bit too long). Gin and Juice is loaded up but Jungle Boy reverses into a Canadian Destroyer. The Throwassic Express retains the titles at 7:14.

Post match the Gunn Club comes in and lays out Jurassic Express to end the show. 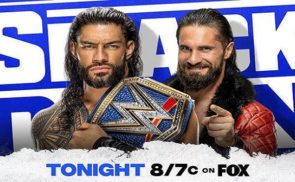