We’re still in Los Angeles and you know that is going to mean a big show. I’m not sure what all it is going to entail but that is some of the fun of Rampage. This week’s Dynamite was a strong show so they have a lot to live up to this week. If nothing else, there is a street fight so that means violence. Let’s get to it.

Allin is defending. Feeling out process to start with Robinson grabbing a waistlock to send the champ to the ropes. A headlock slows Robinson down but he grabs a belly to back suplex to escape. The backsplash only hits knees though and Allin is back with another headlock. This time Robinson sends him up and over the top for a nasty crash to the floor, followed by some whips into various hard things. A drop onto the steps rocks Allin again and we take a break.

Back with Allin shrugging off the snap jabs and sending Robinson outside for the suicide dive. They get back in, where Robinson leg lariats him down for two, meaning frustration is setting in. Now the backsplash can connect for two and a fireman’s carry gutbuster gets the same. Allin hits a Code Red for a fast two but gets crotched on top for a middle rope clothesline. Robinson takes him up top but the superplex is countered into a super Scorpion Death Drop. The Coffin Drop retains the title at 11:45.

Powerhouse Hobbs is ready to spread ashes over everyone.

Here is the Acclaimed to accept their stars on the Hollywood Walk Of Fame. The team is VERY happy to be here (as Bowens lives in Los Angeles) and want the scissors held high. They want everyone to come after them to know that EVERYONE LOVES THE ACCLAIMED. They put the scissors down in the cement….and the Gunns interrupt, because this feud is still going.

The Gunns say the Acclaimed is only popular because they stole Billy Gunn. Billy agrees (with a huge wink at the Acclaimed) and thinks the Gunns should get to put their prints in the cement. The Gunns go to do so and get their pants removed, allowing certain parts of them to be shoved into the cement.

Mogul Affiliates introduces another rapper to talk about how great they are.

House Of Black vs. Ortiz/Eddie Kingston

Malakai Black/Brody King for the House here. Ortiz strikes away at King to start and can’t get very far. A front facelock works a bit better for Ortiz as he brings King over for the tag to Kingston. Black comes in and gets chopped hard enough that he needs a walk around the ring. They both miss spinning shots to the face and sit down for a staredown as we take a break.

Back with King hitting a Cannonball on Kingston but Kingston manages a knockdown of his own. Ortiz comes in sans tag for a jumping DDT on Black, leaving Kingston to grab a suplex for two. Kingston’s spinning backfist misses though and Black hits a jumping knee. King tries to come in but gets sent outside and here are Buddy Matthews and Julia Hart.

The former brings in a chair, which Kingston takes away and uses to threaten Julia. Kingston doesn’t swing but Ortiz yells at him anyway, with Kingston saying he thought it was Black. The distraction lets Black kick Kingston’s head off and shove Ortiz down, allowing him to pin Kingston at 9:46.

Black seems to say Ortiz did well, though it’s not clear if Ortiz heard him.

Jade Cargill doesn’t like the idea of Red Velvet and fires her from the Baddies.

Actor Paul Walter Hauser is here to talk about how much he loves wrestling and always bypasses Connecticut to come to Jacksonville. You never know what is going to happen here and here is Danhausen. Since Hauser (a recent Golden Globe winner, with the trophy in hand) wants to talk about awards, Danhausen brings up being the #1 merchandise seller last year.

After thanking the fans, Danhausen asks if he can have the Golden Globe. Cue Jay Lethal/Jeff Jarrett/Sonjay Dutt/Satnam Singh to interrupt, but Hauser says this isn’t Memphis. Hauser says Jarrett looks like a woman who owns a Crunch Fitness and he never plays that guitar.

The other guys look like they are dressed for a home school prom, which is enough for the villains to beat Hauser down, leaving Singh to stand in front of Danhausen in the corner. The guitar shot drops Hauser but Orange Cassidy and the Best Friends run in for the save. Why the villains, who are even in numbers and have a SEVEN FOOT FOUR GIANT, runs isn’t clear. They do steal the Golden Globe though.

We recap Tay Melo/Anna Jay vs. Willow Nightingale/Ruby Soho. They’ve hurt each other so now it’s a street fight.

Mark Henry doesn’t even bother interviewing the women because it’s time to get violent.

Street fight so Nightingale jumps Melo and Jay from behind with a hockey stick. They set up a table next to the stage but the fight heads down to ringside instead. Nightingale and Melo fight on top and fall to the floor as commentary talks about everything else. Soho got busted open somewhere in there as Jay jumps off the apron to stomp a trashcan around Nightingale.

We take a break and come back with an assisted Gory Bomb sending Nightingale into trashcan for two. The barbed wire is busted out to choke Nightingale but Soho makes the save with a chain. Jay trashcan lids Soho (whose face is COVERED in blood) hard and piles up some chairs but Nightingale turns it into a Tower of Doom. Melo gets a chair shot to Nightingale to save Jay in the corner. Nightingale sends Melo outside though and it’s a Cannonball into a trashcan into Jay for two. Everyone goes to the floor and it’s No Future to Melo.

Soho and Nightingale show respect to end the show. 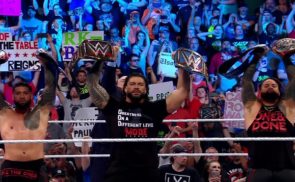