We are less than three weeks away from Full Gear and things have been shaken up a bit. Jon Moxley, who was in the semifinals of the #1 contenders tournament, has decided to go to rehab for alcohol issues, which leaves a big hole in the brackets. We should get a replacement tonight though and that could be interesting. Let’s get to it.

Non-title and commentary brings up Moxley’s issues during Omega’s entrance. Angels goes right after him to start but Omega knocks him back, including some chops. A few shots knock Omega into the corner but he’s back with the Kitaro Crusher. Omega hits a running face shots to take Angels down (think a bulldog but from the front) and the brainbuster onto the knee knocks Angels silly.

The V Trigger misses though and Angels grabs a rollup for two. There’s a suicide dive to send Omega into the barricade and a 619 from the apron staggers him again. A middle rope moonsault drops Omega on the floor and a high crossbody gets two back inside. Omega is back with a sitout powerbomb for two and shock is setting in. Back up and they slug it out but the One Winged Angel is countered into a sunset flip for two. The V Trigger gets two on Angels, followed by more V Triggers for the pin at 7:59.

Post match Omega threatens Angels with a chair, only to have Hangman Page come in for the save. Omega loads up the chair but Angels takes it away, leaving Omega to duck the Buckshot Lariat and run off.  Page holds up the title but lets Omega come get it.

Malakai Black is not happy about being barred from ringside for Cody Rhodes vs. Andrade El Idolo, but it won’t matter. When Julius Caesar was assassinated, it wasn’t just by one man.

Here is a serious CM Punk with something to say. There are two people who are not here tonight and one of them has a very valid reason. The fans chant for Jon Moxley and that is who Punk wants to hear about. Punk knows what it feels like to try and go through everything yourself and be a tough guy. Moxley was doing the same thing and realized he needed some help, which is exactly what he needed to do. Punk talks about how there is nothing wrong with asking for help if you need it and says anyone who needs some help to text or call someone and get some help.

With that out of the way, Punk wants to talk about Eddie Kingston, who isn’t here tonight either. The fans chant for Full Gear but Punk likes the idea of being in St. Louis for Rampage to get Kingston’s apology. Punk was ready to jump into Moxley’s spot in the eliminator tournament but thanks to Kingston, that isn’t happening. See you on Friday.

Miro has been announced as Moxley’s replacement and is glad that his God has cleared a path back to his wife. He will be champion, he will be forgiven and he will be loved, and then he will forgive his God.

The Superkliq insists that last week was a fluke and nothing like that is ever happening again. Christian Cage pops up to tease a fight but the team says they have the numbers advantage. Cue Luchasaurus so the Bucks tease leaving, only to have the fight break out anyway. They brawl into the arena with the Kliq taking over, only to have Jungle Boy pop up with a flip dive off the stage.

The fight heads onto the stage with Christian spearing Cole but the Bucks take him down. Luchasaurus makes the save and Jungle Boy gets the Snare Trap on Cole to knock him out. Christian brings in some chairs and crushes Cole’s head with a Conchairto.

Ruby Soho and Kris Statlander respect each other going into their TBS Title tournament match.

FTR is defending and del Sol is better known as Kalisto. Del Sol starts fast with some dropkicks, sending FTR outside. Back in and more dropkicks send FTR outside, meaning it’s time for some springboard dives to take them down again.

We take a break and come back with Aerostar hitting a top rope back elbow (which might have been a moonsault press that didn’t rotate very well). Del Sol comes in as the pace picks back up, including a pop up hurricanrana to Harwood. A double cover gets two on the champs and a Salida del Sol plants Wheeler to set up the springboard splash for two more with Harwood making the save. Aerostar grabs a victory roll but Wheeler reverses and grabs the rope/tights for the pin to retain at 8:45.

Result: FTR b. Samuray del Sol/Aerostar – Rollup to Aerostar with a handful of tights/grabbing the rope (8:45)

Hikaru Shida got her trophy for 50 wins but Nyla Rose and Vickie Guerrero interrupt. Rose talks how she has dealt with Shida before and their TBS Title tournament match will be an easy night.

Here is the Inner Circle to announce which members of American Top Team they will be facing at Full Gear. Cue American Top Team, with Dan Lambert insulting the city and Chris Jericho insulting the whole team. Lambert wants to get to it and lists off everyone’s credentials while telling the Inner Circle to make their picks. Jake Hager picks Junior Dos Santos, promising to drop Dos Santos faster than his last fight (71 seconds). Santana picks Andre Arlovski (another former UFC Heavyweight Champion) and tells him what he can bite.

Before we get to the final pick, Lambert talks about how Jericho insulted Paige Vanzant, who wants in the final spot. Looking at those pants though, none of the team has enough to take her on anyway. Jericho: “You want to take on all five of us by yourself? Well that joke writes itself. Maybe you can put it on your OnlyFans page.” Ortiz throws in some Spanish, with Sammy Guevara translating into “you’re a b****.” Jericho finally gets to the point: Dan Lambert is the final member (after Lambert said he was the #1 member of the team). Lambert freaks out.

Matt Sydal is cool with Dante Martin wanting to train with Lio Rush, because he can train with Lee Moriarty now anyway. The tag team challenge is thrown out and Rush accepts in a hurry.

Rebel and Britt Baker are here with Hayter, who trades headlocks with Jay to start. They head outside with Hayter being sent into the barricade but managing a knee to the head. We take a break and come back with Jay taking her down by the hair and sending her into the corner a few times. A DDT gives Jay two but she can’t get the Queenslayer. Instead, Rebel offers a distraction, followed by Baker offering a distraction, allowing Hayter to hit a lariat for the pin at 5:52.

Post match the beatdown is on but Tay Conti runs down for the save. The numbers game eventually gets the better of her but Thunder Rosa (Hayter’s next opponent) runs in for the real save.

Jade Cargill doesn’t care who she is facing in the tournament.

Here is MJF to call out Darby Allin (in the rafters). The two of them didn’t sweat the new names coming into the company because without the two of them, AEW doesn’t work. They’re just better than the other pillars and it drives everyone crazy. People like Allin more than, because he is more like them. MJF is the one person that everyone hates because he is just better.

Allin lives life with reckless abandonment and it is because he can never fit in, just like these people. MJF talks about how he is the perfect package of someone who can talk this well and back it up in the ring. He is so much better, that he could beat Allin with a freaking headlock takeover. Allin says he is everything MJF called him and promises a wrestling match at Full Gear.

As for tonight though, it’s time for him to let his anger out. Allin comes to the ring, but MJF bails. Cue Sting and a bunch of masked goons to chase MJF back to ringside but Shawn Spears comes out to fight the goons to the back, leaving Allin and MJF to brawl in the crowd. MJF gets the better of things for a bit, only to have Allin clothesline him over the barricade. The Coffin Drop is loaded up but MJF bails into the crowd to escape.

Cody strikes away to start, including the ten right hands in the corner. Andrade is sent to the apron but lands on his feet, allowing Cody to hit him a few more times. Back in the Cody Cutter is countered into a shot to the floor so we take a break. We come back with Cody not being able to grab a double underhook, allowing Andrade to hit a discus elbow instead.

The running knees in the corner connect and Andrade nails Three Amigos to keep Cody rocked. Andrade misses the split legged moonsault though, allowing Cody to bust out the Flip Flop And Fly to put him down. Cody’s Figure Four is broken up so Andrade grabs his own, sending Cody over to the rope. Arn Anderson has to beat up Jose, leaving Cody to send Andrade outside. Cody tries the suicide dive but FTR pops out from underneath the ring and Cody’s dive hits the AAA Tag Team Titles. Back in and El Idolo finishes Cody at 10:33.

Post match the beatdown is on but Arn gets in to square off with Tully Blanchard. Cue the Lucha Bros to take out FTR before the fight can break out though.

John Silver is ready for Adam Cole, who he calls Budge, because Cole hasn’t followed his advice about getting a hair cut. Maybe if he did, he wouldn’t have gotten a Conchairto earlier tonight.

The Bunny and Red Velvet are ready to face each other in the TBS Title tournament on Rampage.

Bryan Danielson is on commentary and a bunch of the Best Friends are here with Cassidy. Both guys are banged up here, as Cassidy has taped up ribs while Miro has a taped up leg. Cassidy kicks at the leg to start and then runs to the floor, where the hands go into the pockets. They switch places but Cassidy’s dive is countered into a heck of an overhead belly to belly.

We take a break and come back with Miro stomping away until he charges into a boot in the corner. Cassidy gets fired up and slugs away, setting up the tornado DDT for a near fall. Cassidy knocks Miro outside and hits a big dive to send him through a table, meaning Miro has to dive to beat the count. Back in and Cassidy hits the Beach Break but Miro kicks him down again, setting up Game Over for the tap at 7:32.

Post match, Danielson comes to the ring but Miro isn’t about shaking hands. 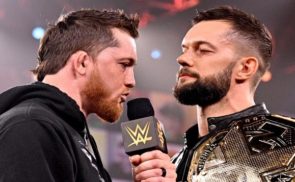 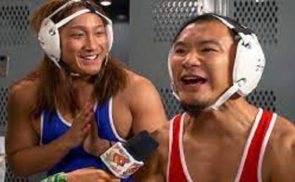