We’re back after last week’s Best Of 2022 event with the first show of 2023. That means we are just over a week away from Hard To Kill and the card is mostly set. There is always room for a little more effort though and now we might be getting to do just that. If nothing else, getting some of the lower card built up should help so let’s get to it.

In Memory Of Don West.

Deonna Purrazzo is on commentary. Wilde is in all black and apparently has a new attitude, as seen on Before The Impact. Purrazzo doesn’t think much of Wilde’s resume, asking how long it has been since Wilde was a champion. Fair enough really, as it was a long time ago. They grapple to the mat to start with Slamovich spinning out of a wristlock into an armbar.

Wilde avoids a charge in the corner though and some choking has Slamovich in trouble. As Purrazzo complains about Hannifan talking about everything else coming tonight, Wilde sends Slamovich face first into the apron. That earns hear a northern lights suplex and a forearm to the face, followed by a suplex to send Wilde into the corner for two.

Back up and Wilde strikes away at the ropes, setting up a double clothesline. Wilde is back up with a Codebreaker but Slamovich pulls her throat first into the top rope. Slamovich stops to yell at Purrazzo though, allowing Wilde to grab a small package for the pin at 8:20.

Sami Callihan wants the Design but isn’t sure if they want him.

We look back at Rich Swann and Steve Maclin brawling last week.

Swann challenges Maclin for Hard To Kill with no DQ, no countouts and falls count anywhere. Be ready to fight all night long.

Crazzy Steve introduces Taurus, promising that he will crush Greene (you may remember him as August Grey in NXT) with his hooves. Greene starts fast with a running hurricanrana so Taurus hits him rather hard in the corner. A powerslam gives Taurus two but Greene sends him outside. Greene clothesline Taurus down and declares himself the best thing in wrestling as we take a break.

Back with Greene hitting a dropkick to the back for two, followed by a springboard spinning crossbody. A suplex into a German suplex gives Greene two more but Taurus grabs some Sling Blades. Taurus hits a pop up Samoan drop and Destination Hellhole finishes Greene off at 9:07.

Post match Trey Miguel runs in to jump Taurus and gives him the spray paint treatment.

Kenny King invaded Mike Bailey’s dojo and beat up his students as Bailey wasn’t there.

Bailey is ticked and wants King in a Pit Fight (anything goes, fists taped, knockout or tap out).

Gresham shakes his hand to start and they wrestle to the mat in a hurry. A dropkick sends Anthony into the corner but he comes back with a shot to the face. That earns Anthony an ankle crank before tying up the arm and twisting the ankle around again. With Anthony helpless, Gresham stacks him up for the pin at 3:40.

Tasha Steelz yells at Savannah Evans about their recent losses. Gisele Shaw, with Jai Vidal, comes up to offer herself to the team. This doesn’t go well for Steelz, but Evans is interested.

The Design says if Sami Callihan wants to join, he has to start by recreating himself. Callihan can start next week by shaving his head, if he’s interested.

Here is Moose for a chat. He does bad things to people and at Hard To Kill, Joe Hendry is getting a taste of that. Moose has done anything he needed to get here, going from hero to villain, but now he knows what he is supposed to be. On Friday 13, he’s going to be Hendry’s first adversity and take the Digital Media Title while knocking the smile off his face. Moose takes the jacket off and wants the fight right now, so he says Hendry’s name.

Cue Hendry, who says there is nothing worse than a grumpy Moose. The real Moose is inside this one, so tonight let’s let the Moose loose. Hendry has a new song for Moose, including various mistakes and clips of Moose dancing as part of IPWF. The fans chant for Dancing Moose, which has Moose saying he believes….that he’ll beat Hendry up at Hard To Kill. Moose: “NOW PLAY MY D*** MUSIC!” I Believe In His Dancing plays again and Moose is furious.

Mickie James gives us a long look at her career, going from training to TNA (as part of the Gathering) to WWE. We hear about the Trish Stratus feud before she came back to TNA as Hardcore Country. Then she met Nick Aldis (Mickie: “I’m a lookin and I’m a likin! Then he spoke with a British accent and MIND BLOWN!”) and he became the love of his life, leading to the birth of their son.  She thought her career was over but then she went back to WWE. It was great but she wasn’t done. That brought her back to Impact Wrestling and she had one more great run. Now she wants to do it one more time and give the fans someone to believe in.

And now the other side of fun, with a retrospective on Don West, who passed away last week from brain cancer.

Brian Myers and Alex Shelley are here too. Sabin spins out of a wristlock to start and an armdrag makes him complain about some bicep pain. Another armdrag into an armbar keeps Cardona in trouble until he sends Sabin outside. The dropkick through the ropes drops Sabin again and we take a break.

Back with Cardona whipping him hard into the corner, setting up the neck crank. That’s broken up and Sabin’s sunset flip gets two, only to have Cardona blast him down again. Sabin fights up and this the Tree of Woe dropkick but gets sent shoulder first into the post. The Reboot takes too long though and Sabin backdrops him to the floor as we take another break. Back again with Sabin’s tornado DDT getting….nothing as Myers distracts the referee.

Sabin takes out both Major Players with a suicide dive, followed by a high crossbody for two on Cardona. A distracted referee is enough for Cardona to get in a low blow and Sabin gets cut off again. There’s a suplex into the corner, with Cardona nailing back to back Reboots. The middle rope missile dropkick wakes Sabin up for some reason and he nails an enziguri. The Cradle Shock finishes or Sabin at 18:07.

Bully Ray (not supposed to be here this week) interrupts commentary’s preview of upcoming shows and demands a mic. Ray wants Josh Alexander (also not supposed to be here) right now but gets Scott D’Amore instead. D’Amore finds it interesting that Ray is willing to deal with Alexander now after no showing Alexander’s challenge a few weeks back. He cuts Ray off from the “you brought me back” speech and brings up Ray calling him for a job, saying he was a changed man.

D’Amore left this industry twelve years ago and didn’t like what he saw when he looked in the mirror. Then he came back five years ago and wanted to write a new story. The hope was that Ray could do the same, but look at what he is now. D-Von won’t be in the same room as Ray without getting a big bag of money and Ray’s only friend, Tommy Dreamer, is in the hospital. Alexander is coming back to a locker room that respects him and family that loves him. No matter what happens at Hard To Kill, Ray is going home alone.

Ray says that doesn’t leave him sad or pathetic, but rather a three time World Champion. They yell at each other a lot until D’Amore is ready to fight. D’Amore says he built up this locker room (Ray: “A locker room full of nobodies.”) and then nails Ray. Cue Ray’s lackeys to grab D’Amore though and it’s a low blow into a powerbomb through a table to leave D’Amore laying to end the show.

There It Is: Vince McMahon Officially Returns To WWE Board Of Directors 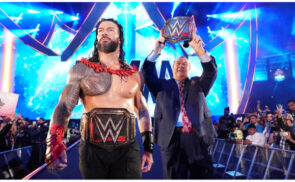 Run It Back: Roman Reigns’ Next Title Defense And Opponent Announced