The Boogeyman Returning to WWE Before “Royal Rumble”

Thanks to the WWE brand extension, some veterans and former WWE Superstars are getting a second chance in WWE. For example, Shelton Benjamin will be returning to WWE programming as soon as he is healthy after his rotator cuff surgery.

Veterans can bring nostalgia back to the WWE product. It also allows WWE to use them as higher quality enhancement talents to put over the current crop of WWE wrestlers that could use wins to build momentum. Recently, WWE is looking at one in particular.

According to a report from Wrestlinginc.com, WWE is interested in bringing back The Boogeyman to WWE television. Apparently, indie promoters have contacted him about booking an appearance, but they’ve been told he’s unavailable through January.

The reason they’re being given is that he’ll be making a WWE return over the coming months, which will be heading into at least January. If this is true, Boogeyman will at the very least be making an appearance at the “Royal Rumble” as he has in the past.

The Boogeyman is currently under a WWE Legends deal that was signed roughly a year ago, so he’s got the option of returning at any time. WWE officials seem to have an idea for him. The first question is if he’ll be headed to Raw or SmackDown?

Do you want to see The Boogeyman back on WWE television? 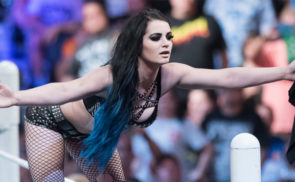 Paige’s Fiance Is Still Married, Her Father Does Not Approve