Rumor: Neville Expected to Feud With Chris Jericho Once He Returns

There has been some inconsistency in the rumor mill about when WWE is planning to bring back Neville. It’s possible that WWE could wait until after the WWE Draft, but the latest rumor claimed he’d return in August.

Although it seems that The Man That Gravity Forgot could drop in from the sky at any moment on WWE programming, we have a much better idea of what he’ll be doing creatively when he returns.

According to a rumor from CageSideSeats.com, Neville is expected to pick up right where he left off when he broke his ankle on Monday Night Raw.

The rumor is that his first feud back after returning will be with Chris Jericho. It was already revealed that the two men will be having matches over WWE’s overseas tour of Australia and New Zealand.

It only makes sense that the two men work together on Raw or SmackDown depending on where both men are drafted to on July 19th.

There was a rumor that Neville would be involved in the Intercontinental Championship hunt after his return, but it seems WWE may want him to get his legs under him with Y2J first. That’s a good idea, and then Miz vs. Neville can take off for “Summerslam” if Neville gets back sooner rather than later.

Do you want to see Jericho vs. Neville? 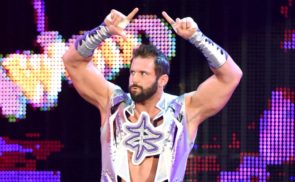 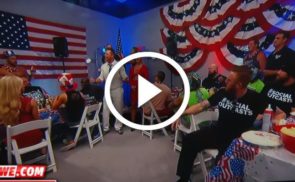