One of the most popular superstars in Lucha Underground is Angelico. He’s been involved with Ivelisse and Son of Havoc for the majority of the show, and they became the first Trios Champions in the promotion’s history.

Just in case, you haven’t been watching Lucha Underground and have been missing a show that is consistently a breath of fresh air every week. Here is one match you owe yourself to give a watch to see if the product offers something you’d enjoy:

Recently, Angelico did The Roman Show to promote Lucha Underground, and he discussed his career, his training, and why the trio style has transitioned to the United States.

You can listen to the full interview right here. Below are a few of the highlights:

Why is the Lucha Libre style of wrestling catching on with American fans?

“It’s more difficult in some ways and fun in some ways,” he said. “I look at it as a plus. Instead of having four you have six wrestlers. More activity comes out of six than four people. It’s non-stop action.”

What was it like training with Japanese legend Ultimo Dragon?

It’s been rumored that WWE is interested in signing Angelico. Do you want to see in WWE? 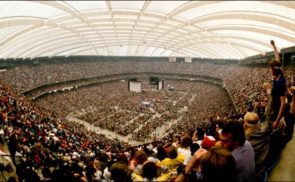 Wrestlemania III: The Biggest Match in the History of Professional Wrestling