Thankfully, we don’t have to hear about Finn Balor going to the main roster any longer. From this point forward, we just have to turn on Monday Night Raw to see him every single week.

Tonight’s WWE Draft didn’t waste any time getting started as Shane McMahon and Daniel Bryan made their choices and Stephanie McMahon, and Mick Foley made theirs. The first pick from NXT was made by Raw.

To the surprise of no one, Finn Balor was the first talent from NXT selected in the WWE Draft, and he will be headed to Monday Night Raw after being chosen by Stephanie McMahon and Mick Foley.

Now that Finn Balor is headed to Raw, it’s going to be very interesting to see what his first feud will be since there will be several possibilities, but he’s going to have a lot of possibilities based on the pick dozen picks.

Honestly, WWE picked the perfect time for Balor to debut because he likely won’t be on WWE television until after “Battleground,” so he won’t be debuting “The Demon” until “Summerslam.” That is a perfect place for Finn Balor to become a megastar. The only question is who will he be facing at the event?

Who do you want to see Finn Balor feud with first on Monday Night Raw? 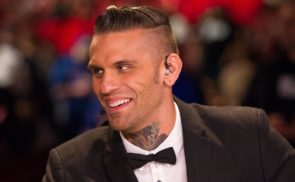