Total Bellas isn’t the most popular television series with the WWE Universe. A lot of that is because of the mixed reaction most fans have to The Bella Twins or the twisted view the E! Network spins some of WWE television for an audience that doesn’t know better.

Despite some of the bias and negatives of these shows, they can be worth watching for some extra nuggets of information that you would not have known beforehand. For example, you’ll learn something cool about Daniel Bryan tonight on “Total Bellas.”

It was reported by Wrestlinginc.com that Daniel Bryan and Nikki Bella go to the WWE Performance Center in tonight’s episode. They bump into Sami Zayn, start talking, and Bryan reveals that he was developing an entirely new style for his return to the ring.

Unfortunately, we’ll never get to see it in action, but we get a small preview during the show that makes it look very interesting. Bryan mentioned that he thought it would be very effective against Brock Lesnar and he would have used it in a match against him.

The conversation goes into the potential for Daniel Bryan to become a trainer for the company, but there are some reservations about him fitting into that role.

Do you think Daniel Bryan vs. Brock Lesnar would have been a great match? 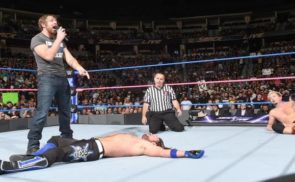