BY Wesley Copeland – ON November 3, 2016 IN News, Uncategorized, WWE

Ric Flair has spoken about his daughter Charlotte’s in-ring ability, spots which were removed from the Banks/Charlotte Hell In A Cell match, and how he feels about John Cena beating his championship record.

Speaking on Busted Open, quotes via Wrestlezone, when asked about Charlotte’s ability, Flair says “I think she’s the best worker in the company, man or woman. She’s right there with Seth Rollins, or Randy Orton, or Hunter [Triple H]. There’s nothing she can’t do, A.J.[Styles], anything that they can do, she can do.”

According to Flair, the Hell In A Cell match between Banks and Charlotte had two spots removed, although he doesn’t specify what those spots were.

“They took two huge spots out of the match, during the match, because they were afraid Sasha [Banks] was going to get hurt. If the original plan had been, there were two things and I don’t want to say what they were, but you can only imagine. One of them involved a moonsault.”

On the subject of John Cena equalling-and-besting his world title record, Flair says he wouldn’t have a problem with it.

“Sixteen’s not the real number anyway. They just plain won’t recognize two of them, so that’s 18, and then there were three more. No, but, I think the world of John [Cena] and I would have no problem with that happening.” 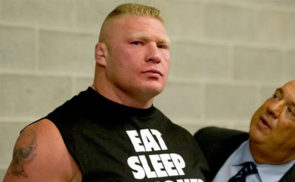