Ever wondered what John Cena would look like in Nikki Bellas clothes? No, you probably haven’t. Either way, the latest promo video for Total Bellas has just that, and is very, very surreal.

The video (posted below) was posted to Nikki and Brie’s Twitter account, and sees John Cena impersonating his real-life girlfriend Nikki Bella and vice-versa for Halloween.

Whether we’ll get Brie Bella as Daniel Bryan next remains to be seen.

For those wondering, we’re hoping for a Triple H x Stephanie genderswap next.

While we’re on the subject of Cena, we recently learned how Vince McMahon feels about a potential Cena heel turn.

It was reported McMahon is strongly against the idea due to Cena’s outside commitments and his role in mainstream media. Cena’s media persona is that of a blue-collared, positive influence. Turning him heel would, in theory, damage that image and be bad for business overall. 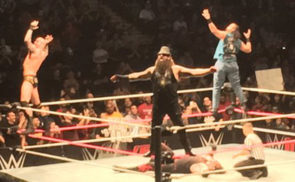 The Wyatt Family Gains a Third Member at House Show