It’s a special occasion. Wrestlers have a lot to cover on a weekly basis. Between going from town to town and show to show, there is only so much free or leisure time to be had. That can make a variety of things difficult, but sometimes even the busiest wrestlers can find time to do something they want. Such a thing took place this weekend and it was a very important moment.

Former WWE wrestlers Keith lee and Mia Yim were married over the weekend. Fellow former WWE star Tegan Nox posted photos online, showing the two both at their wedding and their reception. The two have been engaged since February 11, 2021. Both Lee and Yim were released from their WWE contracts in November 2021. They are both free agents, but neither has wrestled a match since being released from the company.

These two mean so so much to me personally I can’t even tell you. What an honor it is to be near and celebrate the marriage of @MiaYim and @RealKeithLee and also see my good friend @gailkimITSME ! pic.twitter.com/lvMCOogpPE

Opinion: First and most importantly, congratulations. That is great to see and something that a lot of people never get the chance to do. It is hard enough to make something like this work when they have regular 9-5 jobs but it can be even more difficult when wrestling is involved. This is an awesome thing to see and it would be great to see the couple back on television sooner rather than later.

What do you think of the pair? Where do you want them to wrestle next? Let us know in the comments below. 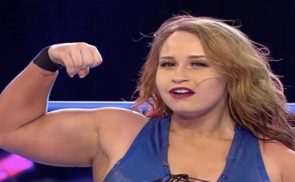 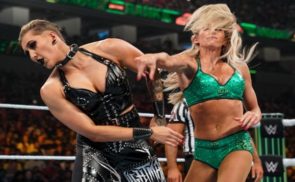 WATCH: Rhea Ripley vs. Charlotte Flair From Money in the Bank 2021