They’ve got options. There are all kinds of matches taking place over WrestleMania 36 weekend and that means we might be in for a lot of interesting stories. Above all else, there is almost no way of telling what is going to be taking place on either night of the show. That makes for some different options, and now we have a question over what will be one of the biggest matches of both nights.

One of the things that WWE has a tendency to do is suggest that there are several different WrestleMania main events in any given year. This might not go well with all fans, but WWE can actually say such a thing this year given the double night setup. Both nights will feature a main event, but which matches are going to be wrapping up eight half of the show? WWE might not know either.

According to Fightful Select, there is an internal discussion inside WWE about which match should main event the first night of WrestleMania. The two matches being considered are Becky Lynch vs. Shayna Baszler for the Raw Women’s Title and Goldberg defending the SmackDown World Title against Roman Reigns. Everything for WrestleMania will be taped in advance, meaning that the decision could be made all the way up until the day of the show.

Both matches have a reason to headline the show. Check out a bit of both feuds:

Opinion: This is something that really could go either way and it is rather interesting that the women’s match could headline (or kind of headline at least) WrestleMania. I’m sure WWE will say that the final match of the first night will be billed as a main event and there is nothing wrong with that, though it isn’t quite the same thing. Either way, it is going to be a big deal for whoever gets the spot and the matches could even be very good as a bonus.

Why WrestleMania 36 Will Not Have Spoilers 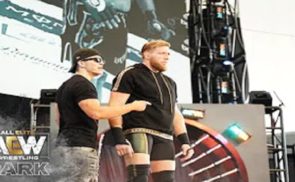