Load up the trucks. The Coronavirus has changed the way the wrestling world works and WWE has certainly been no exception. There are only so many ways to present a wrestling show in a small building and at times, something needs to be changed. WWE has made such changes by moving from the Performance Center into the Amway Center. That might not be the only change they make though.

One of the biggest problems with the Performance Center was it did not seem to fit the image of a major wrestling promotion. The building is not very bit and is only going to be able to handle so much as far as a production goes. There wasn’t much that WWE could do with it for Monday Night Raw and SmackDown, but they have some other shows available and are taking advantage of one.

According to Post Wrestling, WWE is moving both NXT and 205 Live to the Performance Center starting this Sunday with Takeover: 31. There is no word on why the change is being made so suddenly. NXT has been taped at Full Sail University throughout the pandemic and 205 Live has been held at the Amway Center since the main shows moved to the building. The move also comes after the Performance Center was reopened after a recent Coronavirus outbreak.

It will certainly be a change of pace. Check out the old and the new:

Opinion: This feels like it is related to the outbreak being contained and that is not a bad thing. There are very few cosmetic differences between the Performance Center and Full Sail so the move will not make much of a difference for NXT. 205 Live on the other hand will be taking a hit, but it isn’t like WWE has ever treated the show like anything that matters in the first place.

What do you think of the move? Will it help either show? Let us know in the comments below. 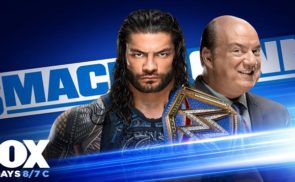