It’s nice to wrap things up. Wrestlers are interesting people as they thrive based off what the fans think of them. If you can get the people behind you one way or another, it can make quite the career and it’s even better if you have some kind of signature that gets people behind you even more. This includes a catchphrase, and WWE has finally gotten rid of some issues with one of them.

Back in 2018, Becky Lynch started the greatest run of his career by calling herself The Man. It was a simple concept: Lynch was the top dog in the company and knew it, but instead of being the Woman, she was the Man, as you often hear used for such a status. However, she isn’t the only person in wrestling history to use the name and that meant it was time for legal issues. Those issues have already been resolved.

According to PWInsider.com, Ric Flair and WWE have come to terms on the issues involving The Man moniker. Flair had used the name for decades in wrestling but no one had ever trademarked it. When Lynch began using the name, Flair applied for the trademark, setting up an issue with WWE. Flair has since agreed to sell the trademarks to WWE, which may have been part of Flair signing a new contract with the company earlier this month.

They both have merit. Check out both versions of the Man:

Opinion: This is where it was always going to wind up and there is nothing wrong with that. WWE should have had the trademark secured if they were going to do something like this with Lynch and Flair didn’t do anything wrong by picking it up. I’m sure all he was looking for was a payday and while it might have been annoying for WWE, they didn’t have anyone else to blame but themselves.

Did Flair do anything wrong? Which Man do you prefer? Let us know in the comments below. 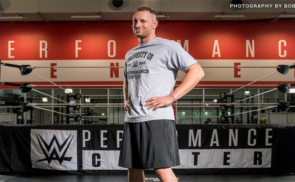 RUMOR: Another NXT Star Being Called Up Soon