What could have been. The wrestling world is one of the biggest and most unique places in all of spots, but there are so many other kinds of athletes out there. It can be interesting when you see the two worlds come together, if nothing else for the sake of seeing what happens when a mainstream athlete steps into a wrestling ring. Sometimes it works out, and we almost saw something on the big stage.

A little over a year ago, SmackDown made its debut on FOX with a major show. As a result, there were several celebrities in attendance, one of whom was future World Heavyweight Champion, boxer Tyson Fury. He and Braun Strowman had some issues, which ultimately led to a match at Crown Jewel in Saudi Arabia. Fury wound up winning via countout, and it turns out that he might not be done in wrestling.

According to Inside The Ropes, WWE was planning a match between WWE Champion Drew McIntyre and Fury at a major United Kingdom pay per view at some point in 2020. However, the show had to be canceled due to the Coronavirus pandemic. WWE is still interested in running the match, which is why Fury and McIntyre have continued to trade shots back and forth on social media. There is no word on when the match would be able to take place due to the pandemic and Fury’s schedule.

Fury looked pretty good while he was in the ring. Check out what he did in WWE:

Opinion: I’m not sure if I need to see Fury back in a wrestling ring, but he did well enough in his first run with the company. Fury is someone who knows how to handle himself in the ring and it could be interesting to see how well fans would go for him headlining a pay per view. If nothing else, a British pay per view could be a lot of fun and they shouldn’t have any issue selling the place out.

Would you want to see the match? Who is the best mainstream athlete to wrestle in WWE? Let us know in the comments below. 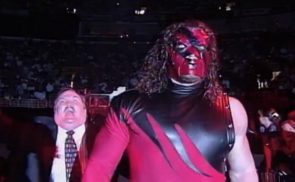 REVIEW: Badd Blood: In Your House: 300lb Men And A Big Cage