The good news that we need. Sometimes people need to smile and there are certain things that are going to cause that almost every time. While it might not be everyone’s favorite, one of the most accurate ways to go is through some nice sweets, which can come in many forms. As you might expect, WWE knows how to get in on something like this and that is what they have done again.

If you remember the late 1980s, or perhaps the Summer of Punk in WWE, the company has a history with a certain kind of dessert. That would of course be WWE ice cream bars, which have become something so popular that they even have their own merchandise. It’s something that fans have been wanting to see back for a long time and after a lot of mentions, the day has finally come.

According to Good Humor via Twitter, the WWE Superstar Cookie Sandwiches have been released nationwide and are available via delivery in select markets via the Ice Cream Shop. There are currently four Superstars available, including Randy Savage, Roman Reigns, Becky Lynch and Randy Savage. These are not exactly the same as the ice cream bars, as these are cookie sandwiches with ice cream inside.

They’re here! The @WWE Superstar Cookie Sandwiches are rolling out nationwide and are now available for on-demand delivery in select markets via @IceCreamShopUS. Which Superstar are you most excited to try? pic.twitter.com/3bO4WY94mO

There is a history here. Check out some of the sensation:

Opinion: I know this isn’t the most serious or important thing in the world but this is the kind of thing that could bring some smiles to some faces. WWE and ice cream go together, but that is something that can be said about anything involving ice cream. It’s a great thing to see them back and even if they might not be the biggest deal in the world, it is cool to see something fun for a change.

Would you buy WWE ice cream bars? What else should WWE bring back from the past? Let us know in the comments below. 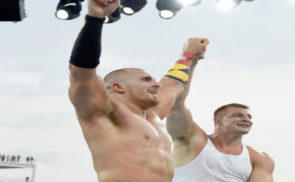