So long and farewell? There have been so many changes to the WWE roster in recent years and some of the biggest have been in NXT. The NXT roster has been ripped apart and there is almost nothing left from the show’s most famous stretch. These changes have not exactly stopped and now another longstanding NXT name might be on his way out. We might even have some evidence.

According to Wrestlingnews.co, there is a chance that Roderick Strong may be on his way out of NXT. Strong and his wife, former NXT star Marina Shafir, have opened a Pro Wrestling Tees store. In addition, Strong has been losing most of his matches as of late, with his most recent victory taking place at NXT WarGames on December 15. This is seen as speculation at this point, though NXT has released wrestlers o little notice in the last year.

Opinion: The more I think about it, the more I think Strong might be on his way out. At the end of the day, Strong is 38 years old and doesn’t exactly fit the mold that WWE wants. That does not exactly bode well for his future, as Strong has been in NXT for a very long time now. I’m not sure what is next for him, but maybe getting out of NXT might be the best thing for him at the moment.

What do you think of Strong? How long will he remain in WWE? Let us know in the comments below. 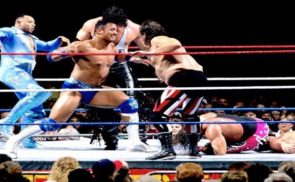 WATCH: This Year’s WWE Rumble By The Numbers Video