Yeah those are big. WWE has long since built up its pay per view events around major matches. These can include some of the bigger clashes that you will see at any point in the year and some of them are well built up with a special feeling. We are coming up on one of the bigger events of the year and WWE has already started planning matches for two of its biggest stars.

WWE is set to run its next event in Saudi Arabia on November 5. According to Xero News, WWE has early plans for Goldberg vs. either Omos or Veer and Brock Lesnar vs. Bobby Lashley. Goldberg last wrestled at Elimination Chamber earlier this year, losing to Roman Reigns. Lesnar last wrestled at Summerslam, also losing to Reigns. Lashley and Lesnar fought at this year’s Royal Rumble, with Lashley defeating Lesnar to win the WWE Title. These plans are still early and NOT official or confirmed.

Goldberg and Brock both Pitched to be working Saudi

Early plans had Goldberg vs Omos or Veer

How ever these are very early plans.

Opinion: That is a pretty big pair of matches for one show, which shouldn’t be a surprise as the Saudi Arabian shows have a tendency to be built around showdowns involving guest stars. Goldberg and Lesnar may not be regular stars these days, but they do have a certain star power to them that is going to draw in some attention. I would be surprised if they weren’t on the show, though a change in opponents might be in order.

What do you think of the matches? How would you see them going? Let us know in the comments below. 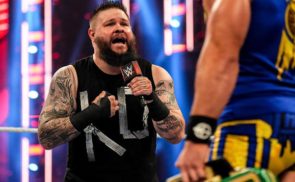 Kevin Owens Undergoes Big Change Behind The Scenes In WWE