Yes, again. There are all kinds of stories in wrestling and ways to present a feud between stars. Some of the better ones have elements of real life issues built in, as they can allow for some great moments in front of the camera. That can also lead to some backstage issues though and that seems to have happened again between two stars who are not getting along at all.

Earlier this month, AEW’s Andrade El Idolo and Sammy Guevara got into an argument on Twitter over an interview El Idolo did on Mexican television. Now, according to TMZ Sports, the two had a backstage altercation at this week’s AEW TV taping, resulting in El Idolo being sent home. This comes shortly after AEW President Tony Khan announced that El Idolo’s mask vs. career match against 10 had been pulled from Rampage.

Opinion: I’m not sure where this is going to lead, but at some point there have to be some serious consequences for the people involved. We are just barely over a month removed from the big backstage brawl after All Out and now something else has happened. AEW has felt like the wild west of wrestling and this isn’t going to help the reputation. It seems like something needs to change in AEW and maybe this is the last straw.

What do you think of the latest backstage issue? What needs to change in AEW? Let us know in the comments below. 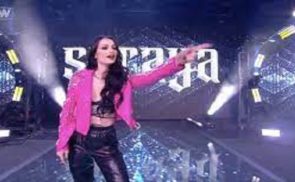