WRESTLING RUMORS: AEW And NXT May Be Going Head To Head Again

Call it a scheduling conflict? There are a lot of wrestling promotions in the world today but only a handful are at the top level. WWE and AEW are at the top of the list and the two are in combat for dominance in the United States. They went head to head for a good while under the Wednesday Night Wars, and now they might be going at it again for one day only later this year.

AEW has announced that its next pay per view, All Out, will be taking place on Sunday September 4. According to Wrestlenomics’ Brandon Thurston, the next NXT special will take place on the same day and air on Peacock. It is not clear if the shows will take place at the same time. This is one day after WWE presents Clash At The Castle in Cardiff, Wales, though it is not clear where the NXT event would take place.

Opinion: It would not surprise me whatsoever to see these shows overlap because both companies seem to like to try something like this. It’s rather annoying for fans who want to watch both, but why go with that instead of just putting both shows on at different times and letting fans decide which they like better? This could go either way, and hopefully that is a one off situation.

What do you think of the situation? Which show interests you more? Let us know in the comments below. 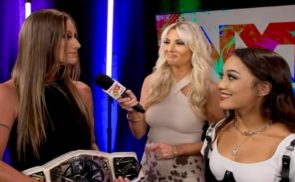 It’s A Call Back: WWE Hall Of Famer Cameo Leads To Titles Being Vacated