Put him down as not a fan. There are certain promos and interviews which resonate with fans for one reason or another. It might be the delivery, it might be the context and it might be what is being said, but sometimes it can be everything coming together. That was the case with a promo last week, but it seems that one wrestling legend was certainly not impressed.

Last week on AEW Dynamite, Maxwell Jacob Friedman cut a promo bashing AEW President Tony Khan and the company as a whole. The promo followed Friedman no showing a scheduled meet and greet over Double Or Nothing weekend. During the latest edition of his Snake Pit podcast, Jake Roberts said that the promo “made me sick” and said the bomb that it dropped in the locker room will have repercussions.

Opinion: I’m curious to see where this goes, but I am a bit more interested in the fact that Roberts, who works for AEW, is so curious to see how the locker room responds. Roberts is someone who has been around for a long time and knows how the wrestling industry works. Hopefully the promo doesn’t cause issues, but you never can tell with something that is this volatile.

What do you think of Roberts’ comments? How will AEW move forward? Let us know in the comments below. 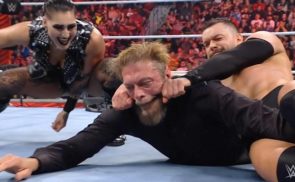