Sometimes you need a twist. For the first time ever, a large part of WrestleMania might not take place live. With so many changes going on in the world at any given time, WWE has decided to tape a lot of things in advance of WrestleMania weekend. As a result, there are going to be matches that take place in different locations, which could make for some unique situations. We now might know what one of them will be.

A lot of this year’s WrestleMania card has already been set but, just like everything else with the show, it is still subject to change. That could mean a variety of things, including adding a gimmick to an already announced match. One of the biggest matches on the show has received just that treatment, though the gimmick itself is going to need a bit more of an explanation.

This week on Monday Night Raw, AJ Styles announced that his WrestleMania match with Undertaker will now be a Bone Yard match. At the moment it is not clear what that means, though Styles suggested that it will involve a grave and that it will take place on location. Styles has talked about ending Undertaker’s career and burying him once and for all. This will be the first match the two have ever had.

It’s rather personal. Check out what got us here:

Opinion: This is something that you have to expect as there is almost no way to get around the fact that WrestleMania is going to be all kinds of crazy. This sounds like the kind of match that will take place elsewhere and be heavily edited, but maybe that’s all they can do in this situation. If nothing else, it can do a good job of helping protect Undertaker’s weaknesses, which have been on display in most of his recent matches.

How do you see this match going? How do you want the stipulations to work? Let us know in the comments below. 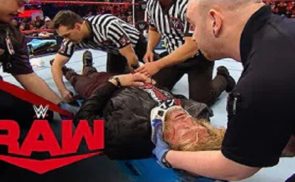