Back to NXT soon? There are a lot of reasons to move a wrestler off of television in one way or another. Some of these ways might be due to a storyline while some might be for a legitimate reason. You don’t know when you might be seeing another wrestler again, as they could be gone for a long time. That might be the case again this week with two names at once.

An announcement on this week’s NXT revealed that two wrestlers will be missing for the time being. Following Von Wagner attacking Ikemen Jiro last week, Jiro has suffered internal injuries and will be out of action for about a month. In addition, Wagner has been fined and suspended for an undisclosed amount of time. This comes after Jiro’s partner Kushida left the company when his contract expired.

Opinion: This feels like a way to get around Kushida leaving WWE, as the other two didn’t have anything to do. I’m not sure what that is going to mean for Wagner and Jiro going forward, but at the moment they get to figure out something else to do, which might take a little time to set up. Both of them are talented guys, but they were thrown into the middle of nowhere out of nowhere.

What do you think of the two of them? What should they do when they get back? Let us know in the comments below. 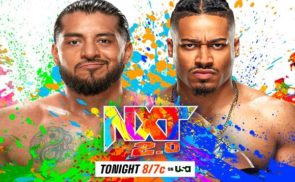 Back Again: WWE Wants To Bring Back Two AEW Stars