That’s one more for some card. WWE is full of talent and there are several names to help fill out all of the shows that they have. At the same time though, WWE is often viewed as having some underwhelming and repetitive creative, which has caused one set of problems after another. Now though, we have a new match being announced, but even then it’s going to be a rematch.

According to 411mania.com, the Kabuki Warriors (Asuka and Kairi Sane) defeated the IIconics in a match at a WWE Live event in Tokyo over the weekend. The non-title match guarantees them a future title shot against the IIconics at a date to be announced later. The IIconics won the titles at WrestleMania 35 and have only defended them twice since then.

The Warriors could have a chance. Check out one of their earlier matches: 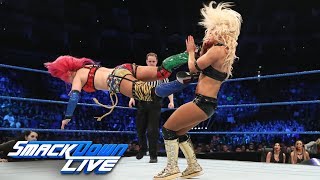 Opinion: This isn’t the biggest surprise in the world and there is a good chance that they are going to win the titles when they get the chance. It wouldn’t shock me to see the match take place at Extreme Rules on July 14, which is a perfect place to see what they can do. If nothing else, it might allow the Warriors to do something for a change, as much like the Iiconics, they haven’t had much going on.

Will the Warriors win the titles? When do you think the match will take place? Let us know in the comments below.