That’s not good for the title. Championships have been one of the most important things about the wrestling world for a very long time and that will probably always be the case. Someone wanting to win a championship and be on top is a very logical concept and something that any fan can understand. Now though, some titles could be in a place they don’t go to very often.

Last week on NXT, Cora Jade turned on Roxanne Perez, despite the two of them being the reigning NXT Women’s Tag Team Champions. This week, Jade said that she was done with Perez for good and dropped her title belt in a trash can. WWE.com’s roster page now lists Perez as one half of the champions with the other title vacant. There is no word on how Perez’s new partner will be chosen.

Opinion: Something like this had to happen and I’m curious to see about where this is going. It wouldn’t surprise me to see the titles dropped for the time being, but what might make sense is to have some WWE teams get involved in going after the titles as well. If WWE wants to have the Women’s Tag Team Titles, just have one set of belts between the two rosters, not one set each.

What do you think of the change? Who will be the next champions? Let us know in the comments below. 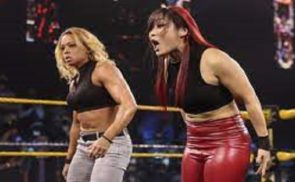