That’s a special one. There are a lot of complications that come with being in the wrestling business, with relationships being up near the top of the list. Being in a relationship is hard enough for regular people but being on the road all the time makes it even more complicated. It can be difficult to find time together, but now two wrestlers have found a way to make it work in a unique way.

Former WWE stars Killer Kross and Scarlett Bordeaux have announced that they have eloped to Alaska and are now married, having held the ceremony in a glacier. Kross also revealed that the two wrestled at a show the following night. The two have been dating for several years and were paired together in NXT, though not when Kross was called up to the main roster in 2021. Since their releases, the two have appeared for a variety of independent promotions but have not signed anywhere full time.

This is rather sweet. Check out a video of the ceremony: 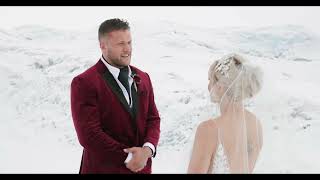 Opinion: This is the kind of thing that you don’t get to see very often and it is certainly one of the more unique ceremonies that you will ever see. Kross and Bordeaux have been together for a long time now and it is cool to see them making something like this official. Odds are the two will wind up in some promotion sooner rather than later and said promotion will be lucky to have them.

What do you think of their ceremony? Where will they sign next? Let us know in the comments below.