(WATCH While You Can): Have You Ever Wondered What It’s Like In WWE Creative?

A different side of things. There are a lot of things to criticize about WWE and a lot of them have to do with the way the product is presented. A lot of the stories don’t make a ton of sense at times and the fans seem to think they can do better than the creative staff. Maybe they could or maybe they couldn’t, but it could be interesting to see things from the other perspective.

This is fascinating in a way. Check out the WWE Creative team talking about their jobs: 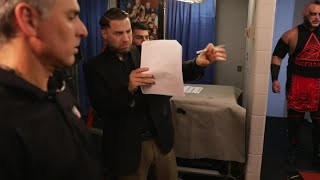 A new unlisted video from WWE’s YouTube page shows what it is like to be part of the WWE Creative team. The video seems to be more like a recruiting video, with the Creative team talking about what has to be done to produce so many hours of television a week. The video is currently unlisted and likely was not supposed to be seen by the public, meaning it could be set to private in the near future.

Opinion: I’ve spent a lot of time complaining about WWE Creative over the years as they come up with some stuff that makes very little sense a lot of the time. That being said though, it probably isn’t fair to criticize them as much as some fans (including myself) do. They have to deal with the whims of Vince McMahon, as well as the pressure of putting together that much original content a week. That’s hard to do, but they make it work, with varying degrees of success.

What do you think of WWE Creative? Are fans too hard on them? Let us know in the comments below.