The effort was worth it. Wrestling is one of the most hard hitting and physical sports you are going to find anywhere. Despite wrestlers being trained to do all of their moves and knowing how to land as safely as possible, there are going to be some things that they do which are going to be dangerous no matter what they are trying. That was the case recently and a wrestler’s boss took notice.

Clash Of Champions took place on September 27 and featured nothing but title matches throughout the show. WWE had to come up with a variety of ways to present their matches without things getting repetitive and they did well enough. One of the biggest matches on the show was a ladder match between AJ Styles, Sami Zayn and Jeff Hardy. Zayn won the title and got a reception after it was over.

I’d call that positive. Check out what happened when Zayn was done:

WWE has posted a clip from their new Day Of Clash Of Champions special, featuring Zayn walking through the curtain into the Gorilla Position backstage after his match at the pay per view. After being congratulated by some unseen people, Zayn thanks Vince McMahon for the opportunity. McMahon makes sure that Zayn is ok and then tells him that it is time to go to work.

Opinion: I can see why the match was so well received, especially when you look at the welts and bruises on Zayn’s back. It was one of the most physical matches I have seen in a very long time and some of the spots they included were rather creative. That’s the kind of match that is going to be remembered fairly well and it is nice to see Zayn getting some recognition for it.

What did you think of the match? How long will Zayn hold the title? Let us know in the comments below. 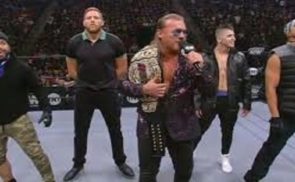