You don’t hear this very often. Wrestling is a very unique industry, but at the same time it does have a lot of similarities to more traditional ones. Something you get in a lot of jobs is the desire to be praised by your peers. These are the people who do the same thing you do so hearing them say you’ve done something well is a nice feeling. When it is from one of the best of all time, it is even better.

WrestleMania 36 featured two matches (kind of) which were not your traditional wrestling matches. This included the Boneyard Match, which was your much more traditional match and then the Firefly Fun House Match, which one of the most bizarre things that you will ever see in all of wrestling. Someone involved in one of the matches certainly liked what he saw and that is some high praise.

Undertaker appeared in an interview with Nine Line Apparel and answered a question about the Firefly Fun House Match. Undertaker praised the match, talking about how different and unique it was. He did not understand every nuance of it but he was not there when it was set up but he could not take his eyes off the match. Undertaker said that it was entertaining and made you think, along with saying that he thought there would be another in the future.

This is some nice praise. Check out Undertaker on the match and parts of the match itself:

Opinion: As much as I’m still trying to get my head around the idea of Undertaker out of character and just sitting around chatting like this, it’s pretty awesome to see Undertaker praise something like this. He’s such a legendary figure in wrestling that it must mean a lot to hear him say this about a match. The Firefly Fun House Match was certainly unique and entertaining and it’s nice to see Undertaker agree.

Did you like the match? Would you like to see Undertaker in one? Let us know in the comments below. 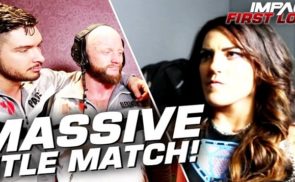