WATCH: Triple H Had No Idea Who Logan Paul Was Before He Came To WWE

It’s quite the introduction. Celebrities have a strange history when it comes to wrestling. There have always been famous people coming inside the wrestling bubble and at times, it can draw in an extra audience. That is a tricky balance to find though, as you do not want a celebrity with a small following taking up too much time. WWE has tried to find that balance, and now they may have again with a famous star. He just might not be famous to everyone.

Triple H appeared on Logan Paul’s Impaulsive podcast and revealed that he had never heard of Paul when approached about Paul appearing for WWE. In addition to people in WWE telling Triple H who Paul was, his children also talked about Paul, which helped show Triple H just how big of a star Paul is. Paul has wrestled twice for WWE, including last weekend at Summerslam, where he defeated the Miz.

There is a lot to this. Check out the full interview: 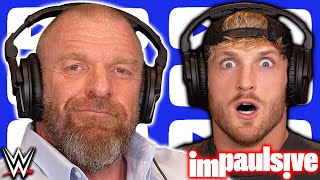 Opinion: This is one of those things that happens sometimes, as there is so much material to absorb that something is going to sneak past you. That seems to be the case with Paul for Triple H, as he is certainly a star but apparently not someone who showed up on Triple H’s radar. What matters is that Paul is in WWE now, and so far he has done quite well with what he has tried.

What do you think of Paul? How well can he do in WWE? Let us know in the comments below.

KB’s Review: They Did Something